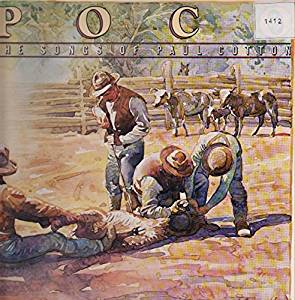 
The Eagles are, of course, a household name but what about the best country-rock band that most people have not heard of?

I am referring to Poco , a pioneer country-rock band which was formed in 1968 [three years before The Eagles] following the implosion of The Buffalo Springfield ,due to the departure of Stephen Stills and Neil Young.

Despite providing not one, but two, bass players/harmony vocalists for The Eagles [ Randy Meisner and Timothy B. Schmit] ,Poco remain relatively unknown and underrated ,especially in the UK , despite producing numerous classic albums , such as “Head Over Heels”, “Rose of Cimarron” and “Indian Summer”.

My introduction to Poco came in 1975 when I saw them in concert [with America] at the legendary Free Trade Hall in Manchester.

The album currently under review is “Poco: The Songs of Paul Cotton”. Alabama-born Paul was not a founder member of Poco but joined the band in 1970 as replacement for the departing Jim Messina [who subsequently achieved great success with Kenny Loggins as Loggins and Messina].

Paul joined Poco from Chicago -based band Illinois Speed Press , on the recommendation of Peter Cetera of the band Chicago. Paul’s joining Poco gave the band’s music a harder,blusier edge than hitherto.

Paul Cotton remained with Poco for 40 years , leaving the band in 2010 ,after recording 16 studio albums with the band. “Poco:The Songs of Paul Cotton” is a compilation of songs that he recorded with the band between 1971 and 1974 and was originally released in 1979. The reason for the 1974 cut-off is that Poco changed record labels in 1975 , moving from Epic to ABC.

This release ,therefore, only covers a 4-year period and does not include such classic Cotton compositions as “Heart of the Night”, “Barbados” and “Indian Summer” but , nevertheless , demonstrates Paul’s considerable ability and versatility as a songwriter and as a fine guitarist.

The first Poco album to feature Paul was 1971’s Steve-Cropper produced “From The Inside”, two tracks from which bookend this compilation. The opener “Bad Weather” is probably Paul’s [and Poco’s] best-known song , a beautiful, languid break-up song featuring Rusty Young’s plangent pedal steel which mirrors perfectly the sadness of the lyrics. Incidentally, Rusty has just released a fine debut solo album “Waitin’ For The Sun” ,at the tender age of 71!

The second track from “From The Inside” is “Railroad Days” ,which is ,for Poco, a relatively heavy rock song, reminiscent of Creedence Clearwater Revival in style.

Somewhat strangely, the intervening 8 tracks on this album are in reverse chronological order , running backwards from 1974 to 1972. Quite why the album was programmed in this way,I can’t say but I will deal with the tracks in the order that they were released.

From 1972’s “A Good Feeling To Know” ,we have 2 excellent Cotton compositions, “Ride The Country” and “Keeper Of The Fire”. The former is classic country-rock with high harmonies and a robust guitar riff ,whilst the latter combines sweet country harmonies with gritty , New Orleans-style R’n’B.

Following the release of “A Good Feeling”, Poco’s principal songwriter [and former Buffalo Springfield member] Richie Furay quit the band leaving the band short in the songwriting department. However, Paul Cotton stepped up to the plate and took over Furay’s mantle for 1973’s “Crazy Eyes”,from which we have 2 tracks, “Blue Water” and “A Right Along”.

Two of my favourite tracks here come from the “Cantamos” album. Firstly, the rocky “One Horse Blue” ,which wouldn’t sound out of place on a Neil Young and Crazy Horse album [ think “Southern Man” ,for example]. A classic country-rock track if ever there was. Secondly, “Western Waterloo” is an epic tale of the Old West with superb harmony vocals and a great guitar solo from Paul .

Due to the limited time-span that it covers [1971-‘74] ,this compilation can’t be seen as a definitive collection of Paul Cotton’s songs for Poco but, nevertheless, it is a superb introduction to a much underrated band and a gifted songwriter , both of whom really deserve greater recognition.

In The Heart Of The Night