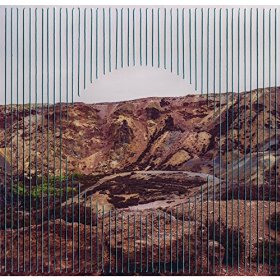 
Plu was formed in the summer of 2012 by sibling trio Elan, Marged and Gwilym Rhys from Snowdonia, and their distinctively unusual brand of Welsh-language alt-folk also contains occasional small hints of country and Americana.

Theirs is a really beguiling sound, wherein voices in tinglingly close harmony entwine within a gorgeous, delicate (appropriately "feather-light") and sensitive musical landscape where autoharp, bouzouki, guitar and accordion dance gently around each other and even pedal steel, banjo, mandolin, melodica and glockenspiel can easily appear exotic and other-worldly companions. This charismatic blend provides the unique setting on Tir A Golau (which, it transpires, is the trio's third album release, again produced by Cowbois Rhos Botwnnog's Aled Hughes) for a generous helping of self-penned songs (the exceptions being the traditional Ambell I Gân and two jointly penned by Endaf Emlyn).

It's a great pity - but inevitable I guess - that there's no English-language translation, or even summary text, provided to guide the non-Welsh-speaker through this utterly charming disc. It may sound slightly fanciful, but to my mind the song Byd O Wydr is rather like what the ISB might've sounded like had they been Welsh - and the fiddle playing on Gollwng Gafael drones away enticingly in the manner of Robin Williamson.

The adventurous tonal extravagances of tracks like Arthur may recall Trader Horne. But in the end Plu's hushed, ethereal, atmospheric music carries a degree of accomplished restraint and a very special, entirely bewitching musical character that - definitive pastoral, paisley and psych-folk resonances notwithstanding - is all their own. (The spell's only partly broken by the applause of a live audience at the close of the final song Hedfan). Wonderful…