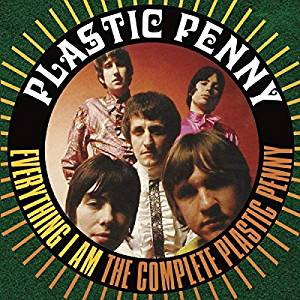 
This new three-disc collection is aptly titled, for it contains everything recorded commercially by the late-sixties outfit of that name that has invariably been regarded as one-hit wonders (their single Everything I Am spent ten weeks in the charts early in 1968).

It might be viewed as over-cynical to remark that the very name Plastic Penny seems to denote something of a sham artefact, a currency that’s not exactly the genuine article but might superficially look like the real thing – for that assertion actually turns out to have more than a grain of truth, at least at the start. For initially it wasn’t an actual working band at all, but merely a convenient name bestowed on an ad-hoc studio act that was hastily assembled by session singer Brian O’Shea (aka Brian Keith) at the end of 1967 at the behest of label boss Larry Page. As the story goes, Page had found the song Everything I Am on a B-side of an American single Neon Rainbow by The Box Tops (who’d charted here in the UK with The Letter a few months earlier), and spotted the song’s hit potential so needed a vocalist to record it, recruiting showband singer Brian Keith and a host of session musicians. Once the song charted, of course, a proper touring band was required, and so it transpired, finally comprising guitarist Mick Grabham, organist Paul Raymond, bassist Tony Murray and young drummer Nigel Olsson (who was later to be an integral and long-term member of Elton John’s band). This lineup recorded a full album and a stand-alone chart-destined followup single (Nobody Knows It), which were swiftly issued in the spring of 1968. The album got good reviews, for all that in reality it was an uneasy and wayward package that exhibited a strange diversity of musical faces, all of them surprisingly convincing but none might be regarded as consistent enough to ensure a true band identity.

The hit single was arguably the album’s least typical moment – hardly surprising given its provenance – but the musicians displayed a likeable penchant for pop-beat balladry that was very much in the Procol Harum mould (even to the extent of a comparable organ-based sound and similarities in lead vocal styling), and the album’s first side included a pleasing cover of The Association’s Never My Love and an intriguing Raymond/Murray original Genevieve. On the second side, things got more interesting with a five-minute psych-style character-vignette Mrs. Grundy that – together with other Side 2 tracks like It’s A Good Thing – featured some blistering lead guitar work. I Want You was a manic cover of a Danish garage band number that included a satisfying drum solo, and the mod-soul opus Take Me Back bore a striking similarity to Winwood-era Spencer Davis Group. The album closed with a respectable heavy-rock take on Strawberry Fields Forever that cheekily used the closing tag of Hello Goodbye for its coda!

Both mono and stereo versions of the band’s debut LP Two Sides Of A Penny appear on this Grapefruit collection, together with some radio sessions recorded by the band in spring 1968, finding the band sound in transition before Brian Keith eventually departed the ranks that summer for a solo career. And there’s even an amusing moment at the end-groove of Killing Floor that replicates a key part of the Bonzos’ celebrated Trouser Press intro!…

The set’s third disc gives us “the new sound of Plastic Penny” post-Brian, a distinctly more exciting proposition and one that’s been well described as closer to a bass-heavy, audibly-grass-growing Move/Who hybrid, as represented by the band’s second LP Currency and strongly prefigured by the radio session tracks Give Me Money and Your Way To Tell Me Go in particular. However musically vibrant and versatile they turned out, though, the Plastic Penny of that time suffered the same fate as several other bands in that they fell between the stools when the underground circuit felt their name was too dependent on being erstwhile pop-hit-makers for them to be taken more seriously. And this despite the ambitious and brave (and no, not foolhardy) decision to cover both Macarthur Park and Hound Dog on the Currency album. Other moments of note on that LP include the Deep-Purple-soundalike title track and the closing Sour Suite (a respectable band jam in all but name), although the cover of The Band’s Big Pink track Caledonian Mission was less distinguished.

For completeness, Disc 3 of this set concludes with a clutch of single-versions of assorted Currency album tracks, together with mid-1969 outtake Celebrity Ball and both sides of the final single under the Plastic Penny name, She Does (a strong, gritty hard-rocker backed by a radical revamp of first-album track Genevieve), which was released in July 1969 before the splintering unit, with only Grabham of the original lineup remaining, eventually morphed into country-rockers Cochise with the recruitment of pedal steel ace B. J. Cole (another story!).

So there we have it – the story of Plastic Penny, a well-presented three-disc box containing not only a brilliantly informative booklet essay but also actually some really fine music that proves well worth exhuming and reassessing – and in the end countering the cynic’s-eye-view of the group name with which this review began.

Your Way To Tell Me Go