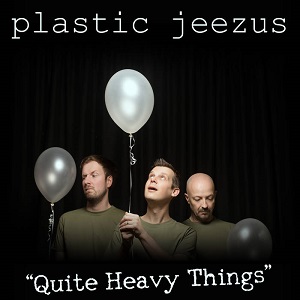 
A new release from South Coast band Plastic Jeezus is always worth getting excited about. Their debut album was ridiculously enjoyable, full of songs rich in humour and a lightness of touch that could almost hide the fact that these guys are talented musicians. They've been a popular addition to many a festival, including our own 30th Birthday Bash last November. The good news is that Quite Heavy Things is more of the same.

Right from the off, with The Ballad of a Petty Criminal, it's clear that we're in for a treat. Once more Plastic Jeezus are not taking themselves too seriously, and this song about the annoying things people do is delightful. Don't be afraid of a title like Moaning With Pleasure, it's not what you might expect, but is about the very British activity of complaining about things after the fact, rather than face the awkwardness of speaking up at the time.

A Father's Advice is just that, with some of it proving to be surprisingly good advice. Leg Day is about those people who can't exercise without boring everybody by talking incessantly about it. If you don't know somebody like that, then you probably are somebody like that. The highlight comes at the end with the weirdly wonderful Part Crustacean. It's about… actually it's probably best to just listen to it. But be prepared to find yourself singing it out loud at inappropriate times, as it's the kind of song that takes hold with both pincers and won't let go.

We also get a bonus demo song on the CD, just for the hell of it. A depressing amount of years ago, my friends and I would try to take random lines from our favourite songs and try to turn them into poems. The results were predictably rubbish. Patchwork Covers takes a similar path, but it is genuinely a brilliant song. It really shouldn't work, but it does, and very well at that. Plus it's always fun playing guess the song as you're singing along with it.

All in all, Quite Heavy Things is another ridiculously enjoyable release. It should be easy to dismiss Plastic Jeezus as a novelty act producing comedy songs, but these songs are brilliantly written, performed really well, and are about as feel-good as music gets. So give this a spin, and you'll be guaranteed to be smiling right up until the next time you watch the news.