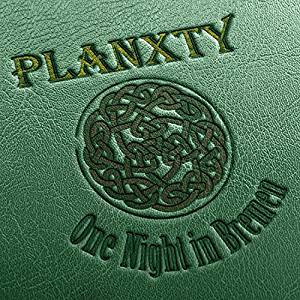 
Planxty need little introduction but for those who aren't aware of this force in Irish music, it comprises of quartet Andy Irvine, Donal Lunny, Christy Moore and Liam O'Flynn. On this album they are joined by Flautist Matt Molloy who would later become a key figure in the massive and ever-enduring Chieftains. When they arrived in the early 70s with flares, taking their rogue-ish hippy attire and performing blistering Irish folk, they certainly turned a few heads and cemented their names into the scene.

The album here is from a time in the late 70s, where the band had reformed and had refined their sound. The album is a live recording from April 1979 in Bremen, Germany before the album recording 'After the Break'.

The album opens on 'The Pursuit of Farmer Michael Hayes', a stomping song sung by the often imitated but never replicated singer Christy Moore. He's in fine form on this album. Liam O'Flynn's pipes open the second track with his evocative and expressive style of playing, this is part of what makes Planxty such a force in Irish music. Combine that with the Mandolin/Bouzouki combination of Irvine and Lunny, they step away from 'Trad' and become their own.

What is a delight from listening to these live recordings is hearing a band in full flow. With both Irvine and Moore who are solo performers in their own right, albums like this will be 'must-haves' for those who follow these two performers.

Andy Irvine leads the plaintive ' You Rambling Boys of Pleasure', this is a standout track on the album. Irvine's classic delicate vocal which sounds like he's singing just for you is evident on this track, rather like Irvine's many poignant Planxty ballads.

'Smeceno Horo' is a driving Balkan tune led by Mandolin and Bouzouki, then Molloy's flute. This would be Matt Molloy's only tour with Planxty before joining The Chieftains.

The classic 'Raggle Taggle Gypsy / Tabhair Dom Do Lamh is the only song from their renowned first album on here. Delivered very well by Moore. One of the early parts in the track you can hear someone in the audience shush other clapping members. It's nice to hear this is a live album with enough audience noise in there so it doesn't become another live album that is just tracks performed differently.

I have to say, what does let this album down is the artwork, which resembles a poor bootleg which has had little care in fonts or their size and also leans a little too much to 'Oirish' with its garishly green artwork. This is by no means an album for someone to acquaint themselves with Planxty, rather for those who wish to re-acquaint themselves with this era of Planxty or to keep their collection up to speed. Which if you are, and can get past the artwork, there are some fine songs on this live album.