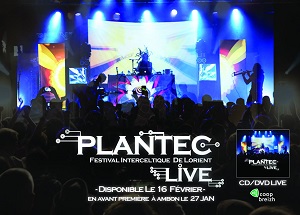 
A sumptuously packaged CD and DVD, recorded live at the Festival Interceltique De Lorient, the biggest Celtic dance festival in the world. This is the album for you if you're a fan of Fest Noz, late night French folk dancing, and were there, or wish you had been. This record will transport you back to a heaving, sweaty mosh in a huge auditorium; to noise, beats and lights, as circles and lines snake round each other in a joyous community of movement.

This is a full on electro-prog rock experience build around the thunderous poly-rhythmic percussion, sequencers, synthesisers and keyboards of Gabriel N'Dombi D'Otala.

The album opens to the sound of riotous applause, as the band take to the stage. A pulsating electronic groove, is layered over pads and a haunting, modal chord change, the bass reaching down into the forbidden low frequencies.

Then Odran Plantec's plaintive bombard and brother Yannick's guitar, lead a powerful, driving bourree, 'Red and Amazer'. A rhythm switch, and the tempo doubles. The woops of the large and exuberant audience can be clearly heard.

In track two 'Criousant de Letiez' the thunderous poly-rhythmic electronics, synthesisers and keyboards, set up a looping electronic groove, layered over pads reaching down into the subsonic, before bombard and guitar kick in with the melody. Woops.

Track four adds a vocal chant to the now familiar mix, with the relentless sub-sonic beat, somewhat detuned harmonies and snarling synths, redolent of early Hawkwind on an off night. The distortion on track five sounds as if the squelchy synth bass might have been de-coning a speaker.

The tracks tend to merge into each other, all featuring near identical modal chords and mostly in the same key. The effect, after two or more tracks, is like being locked in an industrial washing machine with a faulty bearing, labouring to make it to the spin cycle.

The band have been going since 2002 and are huge in their homeland. This album, designed as a souvenir, will, no doubt, delight their fans. How often it will be played, is another question.

Their studio albums are much better. Tracks are shorter and arrangements tighter. For the curious, their 2013 'best of' album might be a better entry point. Or try track 10 'No Christou', where everything works, and there is a decent amount of light and shade. And live, their gigs look totally awesome. Put on your dancing shoes and loose clothing, and bourree till your feet bleed.

But, as a listening experience, for fans only. And even then, you've got to really like bombard.