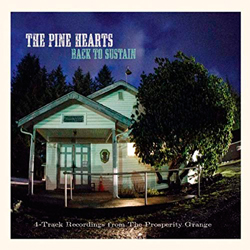 The Pine Hearts
Album: Back To Sustain
Label: Self Released
Tracks: 11
Website: http://www.thepinehearts.com

Taking the three covers first, played old school goodtime style 'Stealin'' is a traditional number from the 1920s originally recorded in its present form in 1928 by the Memphis Jug Band but perhaps best known via The Grateful Dead who included it on their debut recordings, the 1966 Scorpio Sessions, Jerry Garcia revisiting it on his 1996 Shady Grove collaboration with Davd Grisman. The second is more contemporary being a mandolin-strummed bluegrassy reinvention of Tom Petty's 'Orphan of the Storm while the third is actually a rework of a track from their 2018 album Carousel, the mountain music sound of 'Good Luck By The Sea' written by Scott Nolan.

The opening title track also sources that same album, a slow building wistful number about love and loss here minus the original's pedal steel and fiddle. It also yields a further two songs, 'Open Road', banjo and fiddle supplanted by guitar and mandolin, and, given a more lilting arrangement, the downcast 'Living With Depression'.

Their 2015 release, Thin Walls, provides one song, 'By You On The Bayou', its uplifting feel sustained in an arrangement which, although again without fiddle, is pretty much faithful to the original. I suppose, strictly speaking, there is a second, although 'The Heartache Or The Whiskey', a honky tonk styled lost love tune, originally appeared on their 2013 debut, Distant Lights, the first, slightly smoother, rework adding 'Was It' to the title while this strips out that version's guitar solo and reverts to the former's mandolin as well as adding prominent double bass to the arrangement.

The debut is also mined for the uptempo but melancholic 'Alright Fine' with its mandolin solo and image of highways lined with constant strip malls, the final number being the lively bluegrass and instrument interplay of the barroom set 'Standing In The Corners' from 2013's Winter on Orcas. The trio clearly having a good time making the music, played with enthusiasm and authenticity, it may not be breaking and boundaries but, it's highly infectious and hugely enjoyable roots music from the heart. Hopefully a follow-up with all new songs won't be too far off.