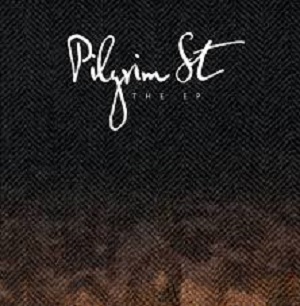 
Since forming around four years ago, Pilgrim St have become one of the most hard working and respected bands on the Irish music circuit. Boasting a seven piece line up that between them play guitar, banjo, mandolin, bass, dobro, accordion and fiddle, plus sharing vocal duties of course, they have "a gift for rousing tales and stirring choruses - hearts wide open and going for broke - just like those loveable predecessors The Pogues or the Saw Doctors".

This EP is presented as an introduction to the band for the uninitiated, with a full length album to follow in due course.

'My Little Blackbird' is a real statement of intent opener with its driving banjo and mandolin riffing intro and a solo voice that soon gives way to a mighty ensemble, folk-rock work out where everyone in the band gets a chance to show what they can do.

'Givin' It Up This Time' is a much slower paced, reflective ballad with a strong vocal and sensitive decoration and then 'Emerald' picks up the tempo again with some fine, choppy mandolin to the fore, clever syncopation and a sweet fiddle solo.

Last track 'Hurt People Hurt People' slightly slows the pace again but still maintains a strong rhythmic pulse. This song has a much more obviously Americana feel and the vocal tone and phrasing put me in mind of a hybrid Chris Smither and Malcolm Holcombe! For me, this is the stand out track of the four here.

Well, Pilgrim St does exactly what it says on the tin. A fine introduction to the bands sound, nicely recorded and produced and each member gets a chance to display their considerable musical wares as I imagine they would in a live show setting, and that's where this music will really take off.