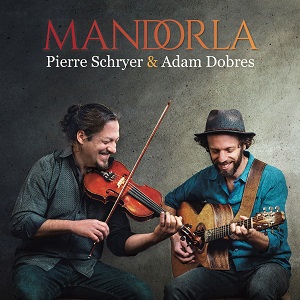 
A mandorla is an almond shape made by two intersecting equal sized circles, a dynamic symbol signifying the overlap of two entities and their commonality. That it is also the name of this album says a lot about the close relationship and tight playing by Pierre Schryer and Adam Dobres. The first set demonstrates their telepathy and also the size of their circle, taking in as it does a North African Berber tune and a pair of Irish tunes "Blue Fiddle" and "Trip To Dingle". "Fleur de Mandragone" and "Berthier-sur-mer" are a pair of Quebec tunes with the sweet guitar and violin duo enlivened by Pierre's bodhran like percussive foot. An older, more stately and majestic music is explored on the "Twas with a furlong of Edinburgh Town / My Lady Hunsdon's Puffe / Carolan's Concerto" With the duo's playing taking in the forementioned Carolan, Dowland and Purcell. The three tunes marry an ordered sense of the dance with a traditional folk rawness. The set that starts with "Orca's Jig" and continues through "The Humours of Glendart" and The Banks of Lough Gowna" sees Adam's guitar that in the rythmic but nimble quality of John Renbourn on the first tune an own composition.

The second and third tunes feature Pierre's sweet fiddle more prominently. Beautiful lilting guitar, with lots of inflection and emotion also features on "Bruach Na Carraige Baine, the edge of the white rock". The way the 17th century air flips between the guitar and fiddle shows the duo at their very best. "Freda's Journey" is another reflective duo piece with exquisite slow tempo finger picking guitar and rich fiddle accents that is simply beautiful together, folk and a touch of romantic violin passion. That Eastern European passionate edge to the fiddle continues into the final set, "Sheepskin and Beeswax", a tough round in the celebrity bake off, just flies along, "The East Club Reel" with a tricky time signature that would require some nimble foot work and "Tico Tico" keep the tempo up and the feet flying to the end.

An album that is a very much a balanced meeting and melding of two interesting musicians, who while clearly having a great time make music that moves you in both senses of the word.