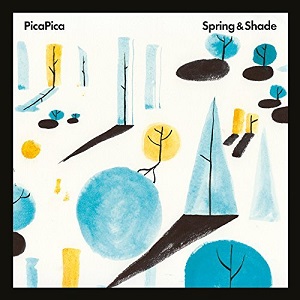 
This EP is an exciting release, the debut on record of a close-knit collaboration between Josienne Clarke and Samantha Whates. They first met on the London acoustic music scene a few years ago, and quickly discovered a mutual love of singing and writing which resulted in them trading backing vocals for each other's projects and unofficially getting together to sing harmonies together for the pure enjoyment of it. The collective "duo name" PicaPica derives from the Latin name for the magpie and takes note of the bird's fabled "one for sorrow, two for joy" connotation, which in turn is emblematic of Josienne and Samantha's duality-based approach to creating and making music - for when writing they tend to take two versions of the same idea and build the songs around that concept. The result is that each song will therefore bear two titles - and this at first is confusing to the purchaser of this EP, where the layout of song titles on the rear cover kindof implies a vinyl-type format, with two sides to the disc which are respectively entitled Spring and Shade (indeed, a limited-edition 10" vinyl version of the EP is also being released). Listening to the CD calls to mind each alternate title during the course of the individual track concerned, and at times imparts varying shades of meaning to the sometimes enigmatic poetry of the lyrics, although the vision is consistent within each song since the collaboration between Josienne and Samantha is clearly wholly symbiotic in both the writing and performance. (In which context, then, it's a pity that on the back of the package the eye is drawn instantly to the grouping of titles on the Shade side, which naturally dominate because the titles on the Spring side are rather unhelpfully printed in yellow on white and are thus not easily discernible.)

PicaPica's music demands instant and continuous attention, not because it's austere or rarefied but because its content is super-concentrated. The soft, delicately poised and precisely enunciated voices rejoice in their joyous, at the same time unbridled and remarkably controlled interplay, which is set into gentle yet powerful relief by some deft, finely detailed yet almost subliminal instrumental embellishments courtesy of "pica three", Adam Beattie (guitar), and "pica four", Sonny Johns (bass and production/programming). The final effect can be ethereal and beguiling (the cool crooning of Spring & Shade/Light Of The Day), slightly detached, otherworldly and mildly elusive (Morning/Dawning); gorgeous, almost cautiously lush and arpeggiated (Small Time/Secret); or more grounded, almost sanctified in its animation (Way Back Up/Last Leaves). But the polished elegance of the ladies' performances can also be deceptive… For the final item on the CD is a combination/segue of two short songs: bookended by the charming Little April Shower (written by Frank E. Churchill & Larry Morey for the Disney film Bambi) we find the classic Paul Simon number April Come She Will (a key song on the Simon & Garfunkel album Sounds Of Silence). The latter gains some interesting nuances by way of a pulsing heartbeat and some subtle harmonic clashes ("shifting sands", possibly representing the vagaries of the April weather).

The press release describes PicaPica's first EP as "music for memories that creep in under the door" and "songs that wear their cares lightly, shining in the dark". How very true - I rather wish I'd written that!