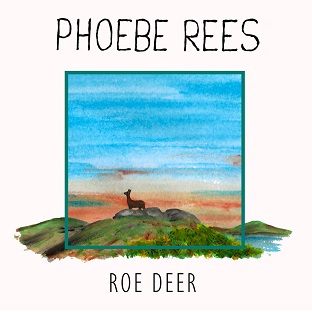 
I was fortunate enough to catch Phoebe Rees's set at Busk Love Folk in February, and also to find her playing in Albert Square, Manchester at a recent political demonstration, albeit with several hundred other noisy people between where I was and where she was busking. What struck me in Manchester is how much more confident is her demeanour these few months on, and this carries through into "Roe Deer".

Phoebe has a strong, clear voice which acts as a perfect complement for her increasingly accomplished fiddle and viola playing. And that's how the EP begins, with a fiddle introduction to "My Mother's Garden". There is a purity about Rees's music that remains true to the spirit of live music, and here she delivers beautifully.

I first heard "Prison Trilogy" sung by Joan Baez and could never quite get on with it, albeit acknowledging its lyrical mastery, but this version seems somehow more suited to the subject. It may also be that it suits the 'live' sound, but it certainly works.

"Roe Deer" begins with a short fiddle piece, and lyrical imagery that takes you on a journey through the natural habitat of one of our largest indigenous animals. Rees then presents an interesting, slower version of Si Kahn's "Mississippi Summer", and very much does it justice.

Tom Anderson's "Da Slockit Light" wraps up this EP with an upbeat tempo. The song is about the depopulation of the area of Eshaness where Anderson was born and fact that each time occupants of one of the area's crofts moved out, another light was extinguished - 'slocklit'.

This work is very much Phoebe Rees's flag in the ground, where she stakes a claim to being one of the finest prospects in British folk music, keeping Celtic, English and Americana folk traditions alive by taking on songs by some of the greatest writers and making them her own.