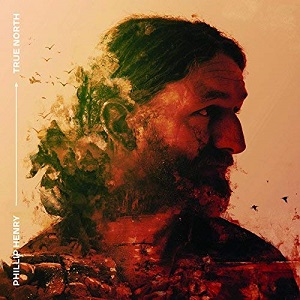 
Declaration of interest time - I have long been a fan of the music of Phillip Henry, albeit from the early days of his performing, along with Hannah Martin, earning their corn as a support act. Things have moved on apace for the pair since those heady days; five acclaimed albums later, together with winning the prestigious BBC Radio 2 Folk Best Duo Award in 2014, not to mention various other highly successful side projects and collaborations and a change of name for the duo who trade under the name of Edgelarks.

True North however, sees Philip release a long-awaited, and long-overdue, solo album, reflecting a decade of world-wide travels and musical osmosis. Be assured, here the use of the word 'solo' is totally correct in the literal sense - no additonal guests, just Phillip, his voice, National and Weissenborn guitars, dobro, the sitar-like 22-string Chaturangi, together with minimal, simple foot percussion, on a sparking collection of 11 original compositions and covers. A possible surprise then that beatbox harmonica, showcased to stunning effect during live performances, does not feature on the recording - but don't regard this as a negative, there is more than enough dazzling wizardary on display.

The conception for the album began some ten years ago, when Henry set off to Kolkata to study under Debashish Bhattacharya, the Indian classical music slide guitar master responsible for creating the musical genre of Hindustani Slide Guitar. Returning with the 22-string Chaturangi, designed by his Pandit, a decade of travelling followed.

Perhaps unsurprisingly, therefore, this eclectic collection encompasses folk, blues, country, a touch of Americana, together with classical Indian music, and represents a smorgasbord of truly world-wide proprtions as we move from Canada to Australia, through Kolkata to Kent.

Opening track, Little Bird commences gently and then builds as the dobro adds levels of complexity on a tune that perfectly exemplifies the outstanding musicianship on the album from the get-go. Written by Kent local Tim Edey, patron of Broadstairs Folk Festival, as a Kent resident myself, this has the additional benefit of resonating personally too and serves as an ideal piece with which to entice the listener further.

A change to National guitar also sees a change of continents, as Phillip plays a captivating version of two tunes from Canadian musician Daniel Lapp, whom he met on Vancouver Island. The Road to Tofino (She's Like A Swallow/Sweet Renunion) evokes the wild natural scenery and surfing activities of the titular area which is located within the Pacific Rim National Park Reserve.

The album's title track follows, and possibly provides the first surprise on the album, as we hear Phillip's voice on a self-composed song, co-credited with Hannah. True North contrasts Tasmania's Southern Hemisphere location with a yearning for his home county of Lancashire, in particular Rivington Moor, and is delivered with a warmth that suggests both a latent song-writing talent and, in terms of his vocal delivery, an under-used commodity.

'I've seen places where the sun stayed for longer
Places where my time has run its course
But now the ties that bind have got me hoping to find true north ...

Travelled the world across, gazed on the Southern Cross ...

We wandered far, on restless wings
The stars rolled out, like a map of unknown things
The magnet rolls, and the needle spins
To find the route that ends where my journeys all begin
And I miss you more, more than you could know'

This is a cracking song, and one that I have now juxtaposed on a playlist next to Ray Cooper's My Compass Points To North.

The fourth track, brings together a tune by Tommy O'Sullivan which Phillip first heard played on the pipes by Ross Ainslie along with a tune of his own. Although my review copy states the former is Unknown, it is in fact Jutland, and this slow air is recast on the dobro here to produce a sublime sound. The more upbeat Domino Road refers to a dirt road through the Victoria, Australia bush which leads to a dreamy fishing spot. Armed with this background information, it is not difficult to imagine that the rhythm generated suggests the skipping and hopping of kangaroos.

A mention here for the production values. Mark Tucker, the serially-successful producer, has done a masterful job here from The Green Room Studios in Devon. All instrumental passages have a depth and clarity which resonates around the room as if live in concert, whilst the vocals are clear, crisp and expressive.

On track 6, the destinctive sound of the harp-like chaturangui makes its first appearance, and what a mesmerising performance it is. To hear the iconic O'Carolan's Welcome, composed by the itinerant, blind Irish harpist Turlough O'Carolan, played on this remarkable 22 string instrument certainly sings to the soul, and the interpretation offered here is nothing short of a revelation.

Slide guitar music doesn't come much finer than the 30 recordings of Blind Willie Johnson, an early and important influence acknowledged by Phillip, and reflected on a stomping version of the former's classic gospel blues song, I Can't Keep From Crying Sometimes, which metamorphoses seemlessly into 90's dance track Not Over Yet to provide an intoxicating dip into the blues genre.

Contrasting with this, the next two tunes display Phillip's undoubted ability to deliver with a sublime sensitivity. Melding two geographical places close to his heart, Helena Torpey's Attingham Waltz reflects on a Devonian summer, whilst his own December is inspired by one of his annual trips back up North for the festive season.

With Brother Wind, Phillip utilises the Weissenborn in his interpretation of U.S. country and bluegrass musician Tim O'Brien's restless story, which he thinks of as an American version of Spencer The Rover, without the prospect of heading home.

'Now half my life is gone
The only home I ever had is this open road
My skin's all cracked and brown
It's a mirror to the desert ground and the dusty wind that always seemed to blow
And I never made a mark
Just scattered footsteps on these shifting sands
And whatever pushes me
It's something only he could ever understand
Cos he knows me, my brother wind
He's lonely too and he takes me away'

The final two tracks see a return to the chaturangui, and reworkings of two instrumentals Phillip wrote prior to his sojourn in India a decade ago. Described as 'tunes of thankfulness', the first, Reverence Revisited, is inspired by Raga Yaman. Yaman is regarded one of the grandest and most fundamental ragas in Hindustani music and one of the first ragas taught to students, albeit with ample scope for improvisation, as I believe is apparent on this recording. Hypnotic and haunting, this has the ability to transport the listener to a meditative world, far-removed from contemporary woes and ills.

This flows seamlessly into the final track, Kalyan Variations, also from the Northern Indian classical tradition, and another reflective and contemplative piece, creating a musical soundscape that will enrapture anyone who has been fortunate enough to visit India, and no doubt enthuse those who have yet to make the trip.

In a world at times seemingly awash with superlatives, there may be a danger that the power of some words might be diluted through overuse; however, what is clear with regards to Phillip Henry is that the listener is clearly in the presence of a singularly talented virtuoso musician.

True North is a spellbinding release which manages to distill 10 years of world travel and musical influences into an album which not only reaches the ears, but also touches the soul and heart. The world is a better place for its release.