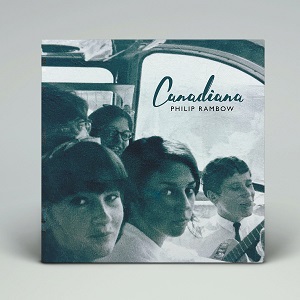 
Back in the early 70s, Rambow arrived from Canada and quickly became part of the pub rock scene as part of The Winkies, releasing one album Chrysalis before splitting up with Rambow going on toteam up with Mick Ronson and record two albums for EMI. Perhaps best known for co-writing Kirsty MacColl's 'There's A Guy Works Down The Chip Shop Swears He's Elvis', he's also written hits for Ellen Foley and Nick Gilder. These days, as the title would suggest, he's immersed in a Canadian brand of Americana, the new album seeing him joined by fellow pub rock veterans Martin Belmont, Pete Thomas and Geraint Watkins alongside bassist Davey Faragher, Penguin Café Orchestra fiddler Bob Loveday and Basement Jaxx vocalist Sharlene Hector.

It kicks off with the first of two singles, the pedal-steel laced 'American Buffalo' bemoaning how "there's not a lot of value in a dollar anymore" , a pondering on what happened to the soul of the home of rock n roll, followed on with the fiddle flurry of mountain music stomp 'Things Are Not Looking Good', essentially another riff on the same theme. Both hark to the days of British pub rock but given a country coating, an approach that continues through the rest of album, from waltztime Hector duet 'Out On Your Own' striking a similar note to labelmates My Darling Clementine and running through the lazy dobro blues 'Get Even', old school soft shoe shuffle 'Springtime In My Heart', and the slower, bluesier, keys and steel-backed 'Ocean In My Heart'.

It all has the relaxed feel that can only come with the experience of seasoned musicians who chime seamlessly with one another in the service of the music rather than their egos, 'Piggin' Out' a good example of their loose-limbed goodtime live vibe. Closing with the Texicana flavoured ballad 'Angel Every Day', the playful twangy guitar call and response lope 'Making Up For Lost Time' and the fiddle and resonator guitar led 'Devoted To You' with its Ben E King undercurrents, this doesn't bust a gut to impress and it won't afford him a comfortable retirement, but it does make for very welcoming listening. There's also a 3-CD anthology dies from Cherry Red in late May that includes his past albums along with rare and previously unreleased material, including his first-ever solo demo from 1972 and an early demo of 'Chip Shop'.