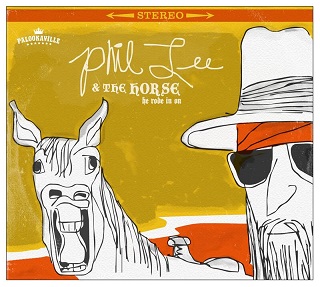 
Should you have ever wondered what an album featuring Bob Dylan backed by Crazy Horse might sound like, then Lee, a veteran Cayucos California based singer-songwriter, goes somewhat to satisfying those fantasies with this latest outing on which he's joined by Neil Young's longstanding rhythm section of bassist Billy Talbot and drummer Ralph Molina, the three of the providing the core tracks. Adding their own contributions is a raft of pedigree names, among them Gurf Morlix, Barry Goldberg, Pete Anderson and Commander Cody's Bill Kirchen.

It actually opens with a reimaging of the rumbustious title track from his 1999 debut, The Mighty King Of Love, here transformed into a slow, organ-led, soulful ballad with echoes of The Band, the opening chords to 'My Generation' paving the way into 'Wake Up Crying', a song built upon a Zimmerman framework circa 'Tombstone Blues', a similar urgent approach sounding Bob echoes on Beckington co-write 'My Man is Gone'.

Elsewhere, other reference points are signposted, Garth Beckington's 'Hey Buddy' nods to Holly as channelled through a catchy Tom Petty melody while the Texicana flavours of The Mavericks permeate the farfisa-backed mid-tempo 'No Exit Wound' and classic twangsome honky tonk country fuels the George Jonesy 'I Don't Forget Like I Used To' with its reversal word play title and the Cash chug of 'Party Drawers', Molly Pasutti playing June to his Johnny, though the Man in Black would never have found the need to sing "you're a f*#%ing mess" on a studio recording.

There's a soulful , Southern blues side too, as heard on the slow but steady groove cober of Brendan Early's six minute 'Rebel In My Heart' and the equally slower burn, harmonic a soloing minute longer cheating song (with drink or drugs rather than a woman) 'Bad For Me'.

Following the closing slow waltz, resignation-heavy number, 'All Right Here', with its Shruti-box and bluesy electric guitar solo, there's a couple of bonus tracks in the bluesy, organ-backed semi-spoken, Willie-esque soulfuness of 'Turn To Stone' and, ending as he began, a revisiting of another old song, a reworking of 'Sonny George' from 2009's So Long It's Been Good To Know You, a song about a trucker accidentally killing some kids, originally a Dylan-styled folk tune, here recast as a flute enhanced, slow Southern country blues that's more Blood on the Tracks than Blonde on Blonde.

It may play rather obviously to its influences, but even so, this is well worth saddling up for.