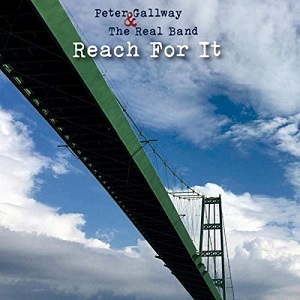 
It seems to be a rule of thumb that, whenever a member of Hat Check Girl releases a solo album, one by the other follows soon after. So, on the heels of Annie Gallup's Bookish, here's the latest from her other half, the Real Band comprising himself, guitarist Mark Wainer and percussionist and backing singer Andrea Re.

There's a jazzy/blues feel to the rootsy foundations throughout, opening with the easy rolling rhythms of 'True', a rather sweet tale of young love ("I wore that football jersey/With the number 22/You told me it looked so stupid/But I was kind of cool") and the first of several tracks that bring Bruce Cockburn comparisons to mind, the tempo picking up on the chugging groove of 'Maggie's Lives', Re's vocals complementing Gallway's raspy tones while some bluesy electric guitar prowls in the background to its pulpy noir narrative ("Nobody knows where Maggie comes from/She shows up at the Pony after midnight/Everybody says that she's got no one/She doesn't say much"). Things smoulder more on 'One Good Friend' ("People are scary sometimes, sometimes/When you don't know how you feel about yourself") which would have been at home on the bluesier steeps of 70s Laurel Canyon rubbing shoulders with James Taylor. But there's also more uptempo excursions into r&b influences on the groove riffing cruising with your best girl 'Looking For The Blue Lights, snaky drug subtext storysong 'No Dice Eddie' and the funky 'Naughty Naughty' ("Her boyfriend hates me I don't blame him one bit"), the latter's DNA and guitar chops echoing the musical roots of 'Kid Motown', a homage to the influential records of his youth, which, rather naturally, has a Tamla swing undercurrent, though "Give me I Feel Good and Maybelline" extends the musical territory to James and Chuck.

It purrs throughout, the sound often tipping the hat to late 60s and mid 70s folksy West Coast pop, particular highlights being the swaying rhythms of 'Late To The Party' ("If slow and steady wins the race/Maybe late to the party is a state of grace") and, keeping the love on the dance floor imagery going, 'Dance While You Can' with its chugging guitar and keys intro. A mix of late night jazzy tones and dreamy soul colour smoothe through 'Walking On Ice', the only non-original here, before the album ends with the organ and funky guitar blues of the choppy percussion 'On The Bandstand' with its lyric about the siren call of rock 'n' roll ("Fender guitars have got a certain kind of style

I've got an old one takes me farther than my broken down Dodge"), a solid sign-off to a laid back, smokey groove of an album. On the title track, he sings "If you want something you really want it reach for it/Reach for it believe in it you know we were born for this". Indeed, he was.

Up In The Country