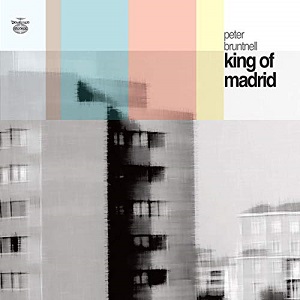 
His tenth (official) studio album finds the Devon-based Bruntnell in musically retrospective mood, tipping the hat to his original 60s psychedelic pop roots rather than his more customary Americana stylings. He's aided and abetted by Mick Clews on drums and bassist Peter Noone with contributions from Dave Little on electric guitar and the legendary BJ Cole on pedal steel, although, that said, it's actually Ian Sloan on the opening six and a half minute 'Broken Wing', church bells tolling behind the synth intro before it breaks out into a musically Laurel Canyon-coloured account of someone breaking away from a religious cult of a "sick tyrannical evangelist" declaring "I'm going to change my name and start again."

'Dinosaur' unabashedly borrows from 'Last Train Clarkesville' (with a hint of Daytripper) and filters it through CS&N for a rolling heat-hazed number with a mid-song guitar solo and a line about how greed "just follows you around to feed on your feelings like a hound", before slowing the pace down for the languorous, dreamy, pedal steel drenched 'Lucan' which offers a sympathetic, softly sung reflection on the 70s scandal of Lord Lucan who disappeared after, allegedly, murdering his children's nanny and attacking his wife, musing on his subsequent fate but also the impact on his young daughter "left all alone in this world."

The circling, chiming psychedelic guitar pop of 'Thief Of Joy', one of two Brexit-themed numbers ("You had the people's faith in your hand talking about the promised land, but the things you said when you made your stand were all lies"), with its reference to the Bullingdon club, the Oxford dining society to which both David Cameron and Boris Johnson belonged, picks up the tempo before it falls back again on 'Memory Hood', a McCartneyish number reflecting on how clinging to the past stops you moving forward ("Back before the years slipped down, I pulled the roots from the ground, didn't know they were holding the town, back from sailing away."

Another steel-stained number, the slow waltzing, country-tinged ineffably romantic title track bizarrely reminds me of Clifford T Ward or a less plummy Peter Skellern, before melancholia resurfaces with the grey, rainy day ambience of the piano sparse 'Widow's Walk', the title a reference to the roofwalk from which sailors' wives would watch in hope of their husbands' return. The mood sustains on the breathily sung 'Snow Queen' (the opening recalling Thunderclap Newman), another exploration of nostalgia's chains that references Dennis Potter's Blue Remembered Hills' while the title nods to Hans Christian Andersen.

Owners of 2012's unofficial release, 'Ringo Woz 'Ere', will recognise 'London Clay', the shortest track at just under four minutes, echoing Al Stewart circa 'Year of the Cat' with a tale of unrequited doomed love, the collection closing with the second Brexit fallout track, the 12 string guitar jangling play out 'National Library' with its soundbite clips

At this point in his career, secure in a loyal and supportive following, no longer chasing the glittering prize of a mass audience, Bruntnell is free to explore whatever musical paths inspiration leads him down, while fans can be sure than, as evidenced here, wherever he takes them the destination will not disappoint. Hail to the King.