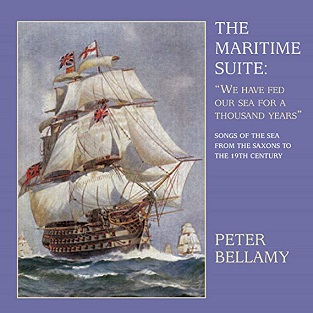 
Over the course of his career, that undersung genius of the English folk scene Peter Bellamy delivered a number of special themed projects – not least the folk opera The Transports and numerous Kipling settings including the Barrack Room Ballads, either of which should (and did) guarantee him a place in the folk hall of fame. Indeed, The Transports has enjoyed a number of revivals, most notably perhaps its reworked and updated incarnation at the start of 2017. A few short years after the original 1977 staging of The Transports came a much less well-known Bellamy “big project” which has nevertheless become the stuff of legend (a kind of Holy Grail for Bellamy enthusiasts) and only sporadically and unreliably available on bootleg and other obscure tape incarnations. This being The Maritime Suite – or, to give it its full subtitle, “We Have Fed Our Sea For A Thousand Years”: Songs Of The Sea From The Saxons To The 19th Century. Over the years, it has also been referred to as The Maritime England Suite.

Whatever, it was conceived as a cycle of songs that was to celebrate National Maritime Year (1982) by tracing British naval history over the span of a millennium, intertwining traditional songs and ballads with his settings of maritime-themed poems by Rudyard Kipling. It was a typically ambitious undertaking, and Peter had planned for his solo rendition of the various songs to be backed by a veritable ensemble of musicians playing specially scored arrangements provided by Dolly Collins. He also intended the commercial release of the resulting LP to be lavishly and expensively packaged as would befit such a momentous project – but he clearly misjudged the economic climate of the time and the severe constraints on any available resources, and unfortunately his proposals for the Suite (quite understandably) were beyond the reach of any record company. It thus fell victim to circumstance, and it never even got “properly” recorded.

Although Peter toured it briefly solo using slides of his paintings, its only significant complete outing was an intimate performance broadcast on BBC Radio 2’s Folk On 2 series in November 1982. That scaled-down rendition featured Peter’s singing backed by just Dolly Collins on piano and Ursula Pank on cello. Happily, Paul Adams at Fellside has now managed to assemble this definitive edition of The Maritime Suite; the master tapes having disappeared many years ago, Paul describes what we hear on this restoration as “a cobbled together version based on all the recordings available but mostly Peter’s cassette master which Peter said was from a rehearsal session”. Cobbled together or not, it sounds thoroughly convincing. And what’s more, it comes resplendent with a superbly informative 16-page booklet whose contents observe the customary house-standards of the label.

Although the recording has been splendidly restored, remastered in true Fellside tradition, the tape source of the original cannot be disguised and there’s inevitably an element of flutter at times, but the listener quickly gets accustomed to the ambience and by the end of the instrumental prelude he/she is completely drawn into Peter’s vision through his brilliant (I’d not hesitate to use that word) vocalisation – undeniably a performance of considerable presence and stature. The oft-maligned “usual” Bellamy sound (once unkindly dubbed “Elmer P. Bleaty”) is here supplanted by a more rounded, at times distinctly lyrical and even almost mellow vocal character, which succeeds in fully delivering the drama of the songs without the stylistic eccentricities that are often associated with his singing. The result is that the listener’s attention remains fully engaged throughout the Suite – which runs counter to the commonplace “accepted” assertion that Peter’s work is not “easy listening” for any extended timespan.

In terms of its special musical character, the Maritime Suite is unquestionably chamber-classical in nature as opposed to folk: rarefied perhaps, but intense and concentrated and very satisfying in context. While the Suite’s structure is more akin to a song-cycle of the classical Lieder genre than a folk/pop/rock “concept album”. Not only in the sense that its 12-song sequence is sub-divided into two “parts”, each introduced by a brief scene-setting instrumental prelude, but also in that the cycle gains added continuity through Dolly’s skilled arrangement of the whole whereby each song leads comfortably (often nigh seamlessly) to the next with naturally-managed, musically intelligent transitions involving tempo or key change. As a result, the Suite’s 45-minute voyage is both a stimulating journey in song and totally engaging and entirely repeatable when taken as a continuous listening experience (although the disc is, usefully, also banded for the individual items).

As if the Maritime Suite were not sufficiently desirable a proposition for purchase, Fellside has added five bonus tracks on similarly nautical themes, basically consisting of what Paul Adams describes as “previously unissued takes from a variety of sources recorded around the same time” (this is, unfortunately, the extent of the available detail within Paul’s notes for his own archive recordings), thus necessarily varying somewhat in audio quality. Nevertheless, the sheer artistry of Peter’s singing, not to mention his interpretive powers, shines through on every one of the bonus tracks, especially perhaps when most closely-focused, as on his a cappella accounts of Kipling’s Big Steamers and the traditional Drowned Sailor, and, when joined by Louis Killen, on a spirited live rendition of Warlike Seamen. Peter’s trademark trusty concertina self-accompaniment is well in evidence on On Board A 98 and The Bold Privateer. (The appearance of the latter may be of particular interest to CD collectors, since this song was previously recorded by Peter only on the Trailer LP Tell It Like It Was, one of his three LPs that has never been reissued in that format. Also, Peter’s only other recorded duet version of Warlike Seamen was with Chris Birch, and appeared on the Topic LP The Fox Jumps Over The Parson’s Gate – and subsequently on Fellside’s Fair England’s Shore reissue.)

It’s probably fair comment that the Maritime Suite is nonetheless likely still to be considered an “acquired taste”, albeit one of a different kind to the “usual” Bellamy experience, but it makes for a fascinating and rewarding “might-have-been” that I’d class among his finest work, in terms of both conception and execution. And indeed, as Peter himself said once in interview, the song We Have Fed Our Sea, one of his most “exceedingly good” Kipling settings, is one of which he was most proud.

Thus, massive thanks to Fellside for (at long last) giving The Maritime Suite the “proper release” it so richly deserves. To be considered “essential Bellamy” for certain, and without doubt my clear front-runner as reissue of the year.