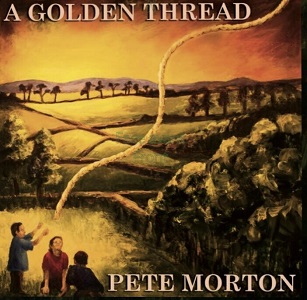 
It is hard to believe that it is now 33 years since Pete Morton made his ground breaking debut album "Frivolous Love" and in so doing injected a much-needed breath of fresh air into the folk scene , with his superb songwriting skills and uncompromising attitude which harked back to his punk/new wave background.

Since then, Pete has released a succession of 13 [ by my calculation] solo albums , as well as collaborations with , amongst others, Jo Freya, Roger Wilson and Simon Edwards and ,more recently, the band Full House , with whom he made the excellent "Game of Life" album in 2016 in which he re-imagined and refreshed some of his best and most popular songs.

Now, with "A Golden Thread" , Pete has recorded his first collection of new material since 2015's "The Land of Time". The title of the album comes from the opening track on the album , which was written by Pete Seeger. Somewhat similar in form to "If I Had a Hammer", "Oh Had I A Golden Thread" is a plea to "Heal our wondrous planet with our hearts and hands and minds".

Pete has never been afraid to tackle the "big issues" head on in his songwriting and this new album is no exception , as he addresses migration [Immigrant Child], the arms trade [Yemeni Moon], climate change [We Are The Trees By The Side Of The Road] , poverty [Universal Basic Income] and injustice [The Grenfell Carol].

I found "Yemeni Moon" particularly moving . Pete berates the "British gunrunners" who "made £6 billion" by selling arms to the Saudis and who are "gonna have to pay for all the blood you've spilled". The poignancy of the lyrics is emphasised by the contribution of the Peace Through Folk Choir and Sarah Matthews' haunting fiddle.

As a postscript to this song, it is noteworthy that in June 2019 the Court of Appeal ruled that British arms sales to Saudi Arabia were unlawful.

In "We Are The Trees By The Side Of The Road" Pete looks at climate change from the point of view of trees "Now you need us more than ever you've done before".

The anthemic "The Grenfell Carol" is a gentle plea for equality and justice with "No more one rule for the rich and one for the poor" and it is as stirring a piece of music as you could wish for.

On a more personal note, in "I Live Your Love" Pete gives thanks to his ancestors for their wisdom and love which lives on through him. With a lovely Celtic-flavoured melody , the song features a duet between Pete and Derby-based singer-songwriter Julie Wigley.

The delightful "Emily Dickinson Revisited [Good Day , Mr Nobody]" also features a duet . This time Pete's vocal partner is Jude Lees of Pilgrims' Way on this paean to the reclusive 19th Century American poet , with whom Pete is in love. In fact , he already declared his love in " I'm In Love With Emily Dickinson" on his 2005 album "Flying An Unknown Flag". The reference to Mr Nobody comes , I believe , from a poem by Emily which goes "I'm Nobody ! Who Are You? Are You Nobody Too?". Whatever, it is a gorgeous song and probably my favourite one on the album.

Pete's sense of humour is all over "Metropolitan Safari" , a light-hearted romp through the thoroughfares of London on a "Moped that rattles like a bake bean can".

There are two traditional songs on the album, both popular Broadside ballads - "Barbry Allen" and "The Farmer's Boy". Pete previously recorded the latter on his all-traditional collection "Trespass" in 1998 when he described it as "A popular song about a successful job hunt".

In conclusion, this is another fine collection by a master songwriter who achieves a perfect balance between political, personal , humorous and traditional songs . The playing and singing are immaculate throughout and this album comes highly recommended .