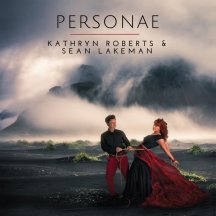 
Have to start with a confession. “Personae” is Kathryn Roberts and Sean Lakeman’s fifth studio album, but it is the first one that I have heard. They’ve been making music for over two decades, have twice won the BBC Radio 2 Folk Awards Best Duo title, and so far I’ve somehow managed to never see them live or listen to an album. Have been aware of them for a while though, as my wife is a big fan of Sean’s brother Seth and I’m a big fan of Gilmore and Roberts, a duo featuring Kathryn’s brother.

I also hadn’t realised that I’d watched a few youtube videos that featured Kathryn, whilst looking for youtube videos of Kate Rusby. Kathryn and Kate both grew up in Barnsley and form a duo, releasing an album back in 1995. They then went on to form a full band with Sam, Seth and Sean Lakeman, known as Equation. Cara Dillon replaced Kate when she left the band. Cara married Sam, and Kathryn married Sean and formed the award-winning duo.

Which brings me to their new album “Personae”. On listening to it, I realised what an idiot I’d been by not searching them out earlier, as this album is brilliant. Yes, of course, for a duo of such pedigree you would expect beautifully played songs, but this is so much better than that. The songs are deeply intelligent and are presented in such a manner that they make the audience feel that way too. There’s no hint of dumbing down to satisfy the masses, and no hint of superiority.

There’s one cover on the album, a beautiful version of Sandy Denny’s “Solo”, and two traditional songs, the first of which is a Child Ballad (not one I’ve ever heard before) called “The Knight’s Ghost”, and all of the remaining songs are originals. “The Knight’s Ghost”, like many such ballads, tells a peculiar story , this one of a woman awaiting the return of her husband from war. When his ship returns with the news of his death, she locks all of the survivors in her cellar and throws the key away. Her husband’s ghost returns the keys to her telling her to set his comrades free. Rather than showing remorse, joy at his return, sorrow at his death, or any normal emotion she asks the spirit for details of who she will marry in the future.

Their own compositions are based on subjects often geographical and often historical and are generally on subjects you would not have thought would be inspirational for a song, particularly ones as fine as these.

Gilmore and Roberts have a song called “The Stealing Arm” about a man who lost an arm due to cannon fire. A surgeon then grafted a new arm in its place, the donor limb having come from a thief. On “Personae”, Kathryn and Sean have a song called “Tribute of Hands”, about a giant, thwarted in love because of his stature, who takes revenge on humanity by buying a castle by a river, and then charging a large toll on any sailors who traversed the waters. Those who didn’t pay were punished by having their hands chopped off. Needlessly to say, trade dwindled, and the locals rebelled, and chopped off the giant’s hand, and threw it away. My first thought on hearing this was that maybe both Kathryn and her brother, Jamie, had some strange dismemeberment fixation.

But no. “Tribute of Hands” is based on an ancient legend about the foundation of the city of Antwerp! Apparently Antwerp is Dutch for ‘hand throw’. The city is rumoured to be built on the site where the giant’s hand was thrown. What an amazing concept for a song. Downright weird, grotesque, and yet fascinating and educational.

Similarly the inspiration behind “The Streets Of The Cats Who Dance” is also weird, grotesque, fascinating, educational and is based on historical events in Europe. In the town of Saint Malo in Brittany, back in 1772 was subject to a night time curfew. The curfew was policed with a pack of English Mastiffs, until one night, the dogs savaged a naval officer to death. I am filled with awe that not only did Kathryn and Sean know anything about the history of a Breton port in the 18th century, but also that they should take that knowledge and create a song about it. The imagery and detail on this song is so vivid, it is almost as if they are describing events that they themselves witnessed.

The second of the traditional songs on “Personae” is called “Boney’s Defeat” and is about Napoleon’s incarceration on the island of St Helena, until his death in 1821. For most artists, I would guess that one song about imprisonment on St Helena would be considered sufficient, but not for this duo. “Old, Old, Old”, written by them, is sung from the point of view of the oldest living land animal, hatched in 1832, just twelve years after Napoleon’s death, a Seychelle giant tortoise, known affectionately as Jonathan. Jonathan, having lived all his life on the island has seen the sunrise on St Helena sixty-seven thousand times. Again, I am stunned at how brilliant these two are in their ability to link a tortoise with Napoleon.

Kathryn not only has an amazing voice, she has several. Backing vocals are provided on the first track, “The Knight’s Ghost” by Sam Kelly, but all other backing vocals are provided by her, and believe me, the backing vocals are so different from the lead I was convinced that there were other singers involved, but no. It is all her. Not only that, it wasn’t until about my fourth listening that I realised that “Boney’s Defeat” is a capella. There are so many layers of really rich vocal harmonies that I had not noticed that there were no instruments playing!

By far my favourite track on the album though is “The Poison Club”. Deliberately light and bouncy to disguise the fact that it is deep and dark, rather like some of the songs from Cabaret. Indeed, I could imagine Joel Grey singing this as the Emcee on the Kit Kat Klub stage. The song is clearly a metaphor, but I’m not quite sure for what. It could be the power of advertising attracting us to deadly pursuits such as smoking and drinking, it could be the media obsessing over body image leading us to anorexia, it could be the toxic pollution from cars, or perhaps the ‘poison’ represents the arms trade. The fact that the song is cryptically ambiguous makes it even more appealing and means that every time you listen you get something else from it.

Kicking myself for not having listened to this duo before, but really delighted that I have finally heard them. Well aware that in some circles describing something as weird or grotesque might be seen as negative criticism, but not in this case. Wonderfully weird and gloriously grotesque, might be a better way to describe them.