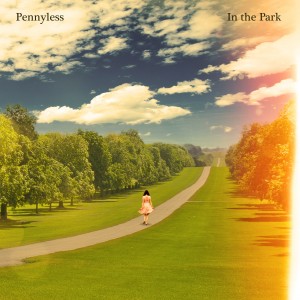 
"I'll lead you a Merrie Dance" so opens Pennyless's fifth album in six years. A rousing 100mph pirate song from the pen of Les Woods and Allen Adams, the sort of track that is guaranteed to get a festival crowd up and moshing. The bow bouncing off the strings of Penny Stevens violin to set the pace before an almost Tenpole Tudor type vocal, punks it up perfectly.

Then, like a light switch, we change, "Angels In My Drink" nods its head to the early sound of Fairport Convention when Judy Dyble helped establish English Folk Rock's own separate identity. Penny Stevens, who wrote the song, has a similar style and quality of singing. And that's a good thing in my opinion.

A Merrie dance is indeed led as styles and pace change quicker than the weather.

"Kinloss", is an instrumental with a Eastern European, almost medieval feel, written by Colin Benton who adds Bass and Bouzouki to the mix.

"Grimes Times" turns us Jazzwards and allows Graham Dale to showcase his Sax and flute.

The chord structures on "Dancing With Annabel" bear a striking similarity to Newton Heath's legendary obscure 1970's prog rockers GravyTrain and their track "Staircase To Be Day", Woods lays down tasteful electric guitar and Stevens' vocal has a breathless and haunting quality.

Add in songs about fairies, loads of choral singing, throw in mandolin, recorder, Bowed Psaltery, keyboards, bodhran, drums, cello and glockenspiel. Take time out to polish a cover of C.O.B.'s "Chain Of Love", adopt a Men They Couldn't Hang stance on the dark "The Gathering". Then finish with mythical folklore in the superbly atmospheric "Grendel".

It's gorgeously quirky stuff, essential and eccentric folk rock at its best and best played loud.

This is a record that grows and grows with repeated playing.

Quite how I've managed to miss Pennyless who hail from Bourne, South Lincolnshire, barely a stone throw away my place of work is a mystery. A mistake I'll put right in the near future.