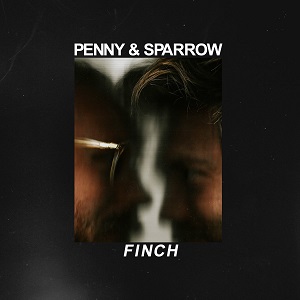 
Based in Austin, Penny and Sparrow are former University of Texas roommates singer Andy Baxter and multi-instrumentalist composer Kyle Jahnke, their music gospel-tinged indie folk, of which this is their fifth outing. According to the blurb, written during a rare break from life on the road, it explores their reassessed perceptions of masculinity, sex, religion, divorce, friendship, vanity, purpose and self, which (basically encapsulated in the cosmic waves of 'It's Hysterical' with "There was a time when your opinion rode upon my shoulder… Gone is all that old shit/File it under my past tense") seems like a heavy load for one album to shoulder.

It plunges right in with Baxter asking "When do you want my love / Do you wanna do-over this life?" on 'Long Gone' which, to be honest, owes rather more to 80s electric piano mellow soul pop than folk, but those roots surface with 'Eloise', which, preceded by an echoey brief 'Preamble', offers a string of disconnected lyrics, fragments of a short story collection, set to a slow thump that put me in mind of Echo Bloom. It's a cut-up technique that frequently turns up in the song structures, notably on the vocally echoey 'Hannah' and the woozy 'Stockholm', creating an impressionistic rather than a directly narrative effect.

Things jump around musically, 'Don't Wanna Be Without Ya' has a jaunty, clattery bounce reminiscent of Paul Simon's African influenced cocktails veined with the shouty bits of The Lumineers while 'Recuarda' is a dreamily crooned romantic ballad and both the heavy-lidded paced 'Gumshoe' and 'Bishop' are painted in folk colours, the latter accentuated with strings and French horn.

It's not an immediate album, especially if you like lyrics that follow some sort of logic, but listened to in the right, chilled frame of mind, there are shafts of beauty here.