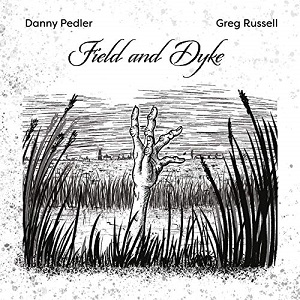 
In 2017, folklore historian and musician Danny Peddlar began an oral history research project in the agricultural fenland district of South Holland in Lincolnshire. This included touring the area with the mobile library, collecting memories, anecdotes and tales which inspired this release, a collection of contemporary folk songs written about, and for, the people of South Holland, on which he is joined by two-time BBC Radio Folk Award winner Greg Russell.

Drawing upon the comments of more than 40 interviewees, relating to the history, culture, environment, politics and society of the region, Field and Dyke incorporates samples of dialogue from these interviews, and, intriguingly, is composed around the sounds of contemporary industry, utilising the rhythms of machines from local factories. It is perhaps inevitable that comparisons will thus be drawn between what is presented here and the ground-breaking late 1950s /early 1960s BBC Radio Ballad documentaries produced by Ewan MacColl and Charles Parker, and indeed the six more recent 2006 Ballads broadcasts.

Danny and Greg should be proud that Field and Dyke is not out of place in such revered historical company, both in terms of having created a vehicle that truly communicates and gives voice to the current social themes of an England experiencing major transitions, albeit through the microcosm of one relatively small geographical region, but also through presenting music of the highest quality.

With one exception, all music on the CD is self-composed, with the majority of the material coming from Danny, whilst credits for vocals and guitar go to Greg, with Danny providing accordion and hurdy-gurdy. Themes of community, immigration and environment permeate the 11 tracks, reflecting the concerns of those interviewed, and the second of these is immediately addressed in the opening track, Down and Deeper.

To the sound of a squeaky dough-prover from a Holbeach St. Marks factory providing the percussive background, the song details the different waves of immigration that the fens have experienced, from Dutch drainers of the 17th Century, through Irish dyke digging labourers and on to 21st Century eastern European fruit pickers and factory floor workers. With an instantly captivating chorus, which might also have provided the inspiration for the cover art, and book-ended, (final chorus notwithstanding), by interview quotes, this is a powerful beginning which firmly lays down a marker, in terms of both content and musicality, for the rest of the album.

The second song, Poverty Knock Retold is a glorious re-working of the much-lauded factory-workers' song illustrating life in the cloth mills of the industrial north. In this version, however, the rhythm of a steam-driven Dobbie loom is replaced by the repetitive sound of a Lincoln-manufactured Ruston & Hornsby engine, whilst some of the additional lyrics contemporise and enhance the acerbic impact of the original.

'It pays to be quiet, just head down and take it
Commerce employs by the crate'

The put-put-put rhythm of a Lister engine, I assume one of the stationary types ubiquitous in the area used for driving electric generators or irrigation pumps, underscores S.K.Y., a joint composition which references the veneration interviewees hold in respect of the divide between the sky and land, a celebration of the region's flatness and wide-ranging views, whilst also acknowledging change as a welcome, positive attribute

I see the difference in all,
And that we all belong'

The theme of change re-occurs in the next track, Pigeon End, a slower-tempo song based upon the testimony of an interviewee who joined the navy and returned to find his place of birth, Pigeon End, Fulney, changed, whilst Knock on Wood, the first of two instrumentals, is a tune written about love in rural communities, again inspired by a moving interviewee story.

On Ready Hands, the first of the two songs solely credited to Greg, immigration is once again the theme, reflecting the frequency with which it occurred in the project. With each verse in the song based on an interview, both positive and negative viewpoints are included in this intelligent offering, which also benefits from Danny's beautiful hurdy-gurdy playing on the Polish dance tune, Haciok.

Seas End, a similarly thoughtful song, also composed by Greg, has as its narrative the story of two interviewees, one local and one not, and their shared desire for similar outcomes for their locality. If there was ever any doubt that Greg is both an eminently talented songwriter and possessor of one of the finest voices in contemporary music, then listening to these two tracks will convert even the staunchest of nay-sayers.

Danny's second instrumental surely provides one of the most memorable song-titles ever - Delta 3000 LD SB XY Plastic Presser. This food-processing machine, from the Ilapak company, again provides the rhythm/percussion for a tune dedicated to the factory workers who endure its persistent sound. Perversely, you won't hear a better, pulsating instrumental all year.

Strangely, no traditional songs appear to have been collected from the South Holland region. On Field and Dyke, Danny attempts to address this with The Boggart and the Farmer, a song redolent of ones appearing on old broadside sheets. Based on a tale said to originate from the village of Mumby in the Lincolnshire countryside, this jaunty and whimsical track provides light and variety to the set.

The album's title track is magnificent. Danny has once again taken the testimonies of his interviewees who have come to work in the fens, and woven them into a song that contains evocative and thought-provoking lyrics such as

'We made the journey and came to your land
To work in your fields and factories
but you spit at our feet and tell us to leave
how can we ever be free?'

Over almost hypnotic, rhythmic beats, this time provided by the sounds of a machine that sprays tomato sauce onto unbaked pizza bases, (Comas? GEA? Album research knows no bounds here at FATEA), there is also an ear-worm of a chorus. The official video release is well worth a viewing too.

All too soon we reach the closing track. Water Makes This Land, the duo's second joint composition. With a title that references the pre-eminent part that water has played in shaping so many facets of the region, historically, geographically, economically and socially, the interview excerpts are again well-chosen and indicative of the element's import. 'The height of a man in the life of a man', a local phrase referring to the rise in sea-levels, is a poignant reminder of the effects that man-made decisions have on an oft fragile environment.

Field and Dyke is a remarkably refreshing and innovative release. It is highly recommended, both as a thoroughly enjoyable musical experience and also as an important document reflecting a hitherto under-recorded aspect of 21st Century English life.

This project has been funded by Arts Council England, Freshlinc and Transported, and there will be a tour in January 2020