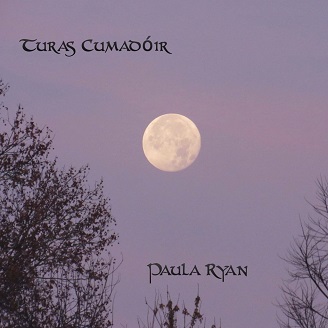 
TURAS CUMADÓIR, Gaelic for songwriters journey, is a proper solo album, with Paula Ryan using the studio to layer the instruments, playing from bazouki, bodhran, guitar, marimba, saxophone and whistles. "Vision" is solo guitar against a massed smooth chorus of her voice, uplifting and majestic. Her roaring saxophone is a warm touch too on this opener. "Raise Our Voice", winner of the Peace Song Prize at Shrewsbury Folk Festival, is altogether more reflective piece with a tonal eastern opening on this positive song that celebrates what connects us. Paula with a powerful voice recalling Maddy Prior or Bridget St John is passionate and compelling.

"Garryroe", with a percussive backing that put me in mind of an earthier take on Laura Vuala's "Green Garden" is powerfully hypnotic. Mostly unaccompanied Paula's voice is wonderful, with hammer dulcimer like accents swirling around her. "You Make Me Laugh" wafting voices then a powerful bodhran pulsing beat is a driving love song, delivered with energy and drive. "Only A Cabinet Maker" is a surprising song about CF Martin, maker of legendary acoustic guitars. One hopes the intricate, chiming guitar is a Martin, hopefully that's a given. "Ebb and Flow" is an atmospheric song with a striking lyric. The restful mystical music and Paula's beautiful voice and arrangement contrasts the words she sings about the giving and taking nature of water. "Caught In A Trap" is another mostly unaccompanied vocal number, with Paula and just a harmonium like tone and a drum beat. The effect is captivating, focusing on Ryan's striking voice and delivery.

"O My Blue Eyed One" is a stately unaccompanied lament for lost soldiers, solo or harmonising on the choruses Ryan is nuanced and captivating with both grace and a sense of real gravitas. A suitable closer as I don't know what you could follow this with. Like June Tabor she ends with a WW1 soldiers ditty and the effect is arresting and literally hair raising. All in all an interesting songwriter and musician on an exciting and often unique journey.