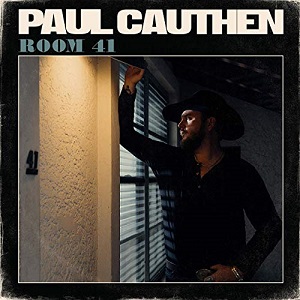 
He's a big guy is Paul Cauthen - well over six feet tall in his stockinged soles and an impressive beard, striking headgear and attire accentuate this.

The man from Tyler in Texas clearly commands attention and this album - three years on from his debut, My Gospel, and the Have Mercy EP of 2018 - is going to be difficult to ignore.

Room 41 feels expansive, rich-sounding, widescreen, tub-thumping, bracing and soulful but it delivers plenty of country emotions as well with the tone of a preacher man never far away.

With no fewer than seven co-writers involved, the 10 songs, understandably, veer and twist to tackle topics that the artiste lists as "lust, envy, pride and despair, destruction and redemption." To his credit, they are delivered wholeheartedly and with a gusto that's not short on fire or brimstone.

Holy Ghost Fire is a cracking late Tony Joe White-style opener, swampy and chunky with a pounding beat overlaid with silky pianos, and in a similar vein, smudged with added Waylon, is the equally terrific, Cocaine Country Dancing. It is a playful, funky mix of soul/ R&B, restlessly rooted in a honky tonk bar. These, for me, are the album's highlights and a couple of lush videos accompany them.

Given that these songs emerged after a rough, tough personal struggle for Cauthen when he lived in Room 41 of a Dallas hotel, the album is robust and sprightly and, to use an old-time phrase, catchy.

Sturgill Simpson successfully broke the alt.country mould and Cauthen gleefully treks down the same route of variety. Slow Down is gospel tinged, Freak offers some Cash-like spoken word lyrics on a rap-mood undertow, while Angel is a straight-down-the-gravel-road love song, fiery and tender in equal measure with Cauthen's voice superb. Lay Me Down is a chunky ballad and a sumptuous way to round things off.

On the album sleeve, Cauthen thanks his family and, most importantly, God for pulling him "out of the gutter." In the clear light of day, his music should keep him contented.