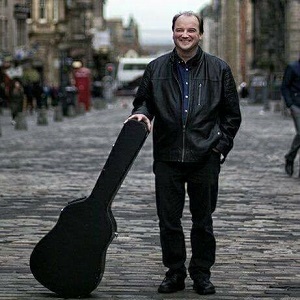 
Paul Brand's single "Walking Up the Royal Mile" is taken from his new album "12 Songs". The song has a Country feel to it and visits many parts of his home city Edinburgh; the Royal Mile is only one of them. I found it pleasurable to mentally visit those places again, but if you have never been there, all the names are familiar. It follows a rambler back in town whose friends have all got homes and are settled, while our hero visits a bar but the name has been changed from the one he knew. He recalls street corners that he stood on when he was a boy, staring at locals' faces, but still not knowing anyone. He should be moving on yet he doesn't know why, maybe it's the thought of loving someone. He remembers his dreams but he sees HER in all of them. She calls his name and he turns his head, but she'd already moved on.

He recollects the attractiveness of cities around the world, but he still ends up waking up The Royal Mile. This attractive song has all the attributes of a modern country song and is performed well, it is a song that grows on you the more you listen to it. The song is a good advertisement for the album which based on this, should be a good buy.

The single is released on Friday 9th February 2018 and is available either through his website or Coda Music Shop in Edinburgh.

Walking Up The Royal Mile