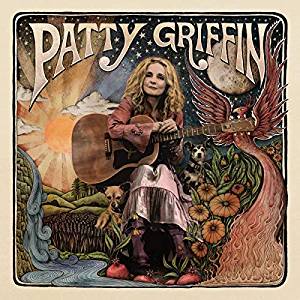 
The use of a plain, eponymous title is customarily either reserved for a debut album or else displays a singular lack of imagination. In a third, less usual scenario, the choice denotes something of altogether greater significance in an artist’s career – and this proves the case with Patty’s tenth studio album, which acquires additional gravitas by accentuating the intensely and directly personal nature of its contents.

It’s Patty’s first album in four years, and it collects together songs written during and in the aftermath of profound personal crisis (several years during which she battled with, and ultimately defeated, breast cancer). These strikingly intimate observations are couched in a variety of musical styles, from jazzy-confessional (Mama’s Worried) and the deceptively unfolding recollection of What I Remember to gritty, swaggering Dixieland swing (Hourglass); calmer reflection (the piano-led Luminous Places) to the country-inflected River and the broodingly animated bodhrán-driven emigration-song Boys From Tralee. Fabulous though the support playing is (see below), two of the standout tracks are where Patty turns in riveting, completely solo performances: invoking abandonment by her mother on acoustic-guitar-accompanied Had A Good Reason, then at the album’s close coming to an almost cathartic acceptance with piano-backed Just The Same, a very poignant expression of survival and determination to leave the listener in no doubt as to her state of mind and the impressive life-achievement which this collection of songs represents.

The album was recorded predominantly at Patty’s home in Austin and co-produced with her longtime collaborator Craig Ross, who plays bass, lap steel and baritone guitar. There are prominent contributions on all but two of the tracks from David Pulkingham (some outstanding Spanish guitar work), while the remainder of the backing crew comprises percussionist Conrad Chocroun, cellist Lindsey Verrill and pianist Stephen Barber. Having listed these musicians, though, it’s to be noted that their embellishments are used very sparingly and textures are kept welcomely sparse while never seeming under-nourished. Perfect for the intimacy of Patty’s songwriting, in fact. Interestingly too, Robert Plant supplies a backing vocal part on two songs: the chilling Coins (perhaps indicatively, the only song to actually mention cancer) and (wordlessly) the drifting, drone-infused, questioning What Now – in which connection I might also observe that a number of tracks (for instance the eerie brushed-shuffle invocation of heritage Where I Come From; the spacey, bluesy murder-ballad-style Bluebeard; and the mantric trance-gospel of The Wheel) inhabit something of a space-shifting world-roots vibe that’s (maybe unsurprisingly) more than a touch reminiscent of latter-day Plant outfits.

This album is very special indeed: a brave, emotionally and musically strong artistic statement. With more playthroughs, I’m increasingly convinced that this will come to be regarded as Patty’s finest hour on record – and there have been some hard-act-to-follow contenders among its predecessors! The album’s release comes just prior to an all-too-brief European tour that starts off in early May with four dates in Ireland then five in the UK.