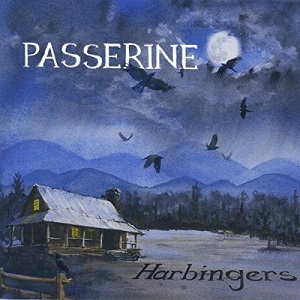 
Not to be confused with the new refugee and migrant based folk ensemble that's headed up by O'Hooley and Tidow (or, indeed, the Melbourne dark pop trio), this Passerine (the name means songbird) are a quartet from Florida who play rootsy Americana and line up as Carmela Pedicini on guitar, David Brain on dobro, bassist Doug Conroy and Sara Stovall on violin, with all four contributing vocals. A mix of original, traditional and covers, Stovall's responsible for the sparse, dark traditional folk-styled New Bride and the more Appalachian flavours of Fish while Pedicini has three credits, the sweetly sung 'Beautiful Like Music', the slow-paced fiddle-led 'Waiting For You' and, building from a brooding guitar intro to a lively fiddle driven mazurka feel, the instrumental 'Madra B'an'.

With the exception of the bluesy strummed folk of 'Fireworks' with the two women harmonising, written by a friend of the band, the rest is all familiar material, ranging from Bill Monroe's mournful 'The One I Love Is Gone' and Stephen Foster's evergreen album closer 'Hard Times Come Again No More' to the fiddle romp 'Dog In The Yard', an adaptation of the Stanley Brothers' 'Pig In The Pen'. And, as befits the album title, they also deliver suitably sober arrangements of three bleak traditional numbers, 'Snow Dove', 'Wayfaring Stranger' and 'Darling Corey'. There may be some legal discussions about name rights ahead, but however things play out, this incarnation are well worth investigating by fans of traditional American folk music.