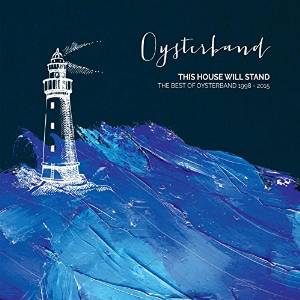 
Subtitled "The Best of Oysterband 1998 - 2015" this double cd release pulls together 29 tracks which show the diversity and depth of one of folk rock's most loved and respected innovators of roots music. A statement evidenced by their inclusion of not one, but two, albums in the top ten of "The Best Of The Best" poll in popular music magazine fRoots.

It's a greater achievement still when you consider that only two releases were chosen each year by the critics from the inception of the award in 1986 to date... These resulting 120 releases were then put to a public vote. "Holy Bandits" & "Ragged Kingdom" (the second collaboration with June Tabor) made the top 5.

So you might expect this release to be pretty good. It certainly does exactly what it says on the tin. And then some as Messers. Jones, Prosser, Telfer, Scott, Davies, Oxaal et al weave and blend guitar, fiddle, bass, cello, voice and so much more into a heady mix of music that never fails to excite and interest.

Split into two discs, the first concentrates on a traditional "Best Of", as the band take us through their choices from the last six studio albums starting with the 1999 "Here I Stand" through to 2014's highly acclaimed "Diamonds On The Water".

Along the way they lift the listener, they rally you against injustice, you want to rebel.

Rebel and revel in catchy choruses that pull you in singing (or in my case caterwauling) such as on the raucous "On The Edge".

Your feet want to dance along to tracks like "Walking Down The Road With You". It's serious fun, if such a thing can be.

Songs resonate, they speak of old age and look back at the past with melancholic glasses "A Clown's heart and a mandolin, crazy-hearted fools sing as one, we'll tear these old walls down and we'll bring back the sun" before launching into an uplifting mantra such as "Rise Above".

There's beauty too. The traditional "Blackwaterside" receives a sympathetic and revered treatment, whilst Joy Division's "Love Will Tear Us Apart" is slowed down into an emotionally charged ballad. It drips sadness and regret as both June Tabor and John Jones give a performance that defines passion slipping through your fingers no matter how you try to regain what was lost.

Disc one closes with wonderful harmonies on the accapella "Bright Morning Star", an Appalachian spiritual.

And whilst the first fifteen tracks are all familiar to fans of the band, disc two takes us deep into unchartered territory.

It starts with a new song "I Built This House" a tale of struggle against unfairness, of standing tall in the face of adversity. A song that received its first UK public airing at the Big Session held in Buxton recently. A song which was enthusiastically received by a sold out Opera House.

It also set the scene for the whole night as the Oysterband exuded energy, passion and approached each song with a fervour almost as if they were playing each song for the first time. There's a definite power to their music.

A power that is captured in a live recording of "Jail Song Two" recorded back in 1991 at the Town & Country Club.

Alternative versions abound, many with the more acoustic treatment associated with the recent Oysters 3 stripped back to the basics tour. "Never Left" is one such song, it becomes even more poignant with the ticking guitar of Alan Prosser, a perfect accompaniment.

Indeed, there's more of a definite group feel to disc two as the balance shifts such as in Si Khan's "Missisippi Summer" where Alan Prosser takes lead vocals: It's a gorgeous take of the track more commonly featuring June Tabor.

It's a feel that was certainly replicated live recently, it was a pleasure to hear Ian Telfer's dry Ivor Cutler like humour, to listen to Adrian Oxaal far too brief Cello solo, a group comfortable in their own skins.

Skinny Single edits are pulled in featuring the voice of Emma Hârdelin ("Ways Of Holding On"), B sides ("Hangman Cry, The Sailors Bonnet") and the rare studio recording of "I Once Loved A Lass" only previously available as a freebie with fRoots (a live version appeared on "Alive And Acoustic" cd from Running Man Records). All of these add to the listening pleasure through their scarcity alone.

Perhaps the strangest two tracks though are "Scattergun" a riff laden, staccato spoken outpouring of sentiment from 2007, almost a throwback to the punkish early days whilst the demo of "She's Moved On" has an 80's sound with synthesised vocals. Weird and wonderful.

The disc ends with another demo, this time "The Cornish Farewell Shanty" (the original was from the Big Session 2004). It's a fitting end to an album that will appeal to fans both old and new especially at the price point of a single disc.

And if you have any pennies (or pounds) left over then you could always support lead singer and Oysterband founder John Jones in his fund raising for Macmillan Cancer Support. In JJ's own words "I want to raise as much money as possible through sponsorship and shows and for the first and only time appeal to everyone out there to give what you can and maybe join me on the walks and the gigs. Macmillan Cancer Support is known by everyone for working to ensure that no-one faces cancer alone or without the support they need, and later in the year I will focus on raising money for my local Hereford Hospital to which I owe a huge debt for their clinical care and excellence" https://www.justgiving.com/John-Jones-Oysterband/