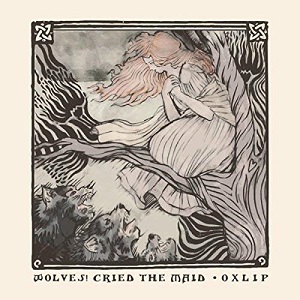 
Oxlip is Jayne Trimble, a Coney Island born singer-songwriter based now in Vancouver Canada, and a band of dreamy good musicians. The album has stickers saying it has been backed and part funded by Canadian government; there's a sense that a treasure has been found and with it a push to share with the wider world. Good call Canada, this is sublime.

It's a word I've seen used to describe Trimble's singing and before I heard her, I must admit thinking that was a bit of a bold claim- awe inspiring, elevated, paradisaical seem too far, but the cap fits and Trimble wears it extraordinarily well.

Setting the scene of the album inspiration wise- I'll do the best I can- I'd say that if you imagine a sort of inter planetary psychedelic Celtic/Americana crossroads, with paths trodden there by Mimi Parker, Maddy Prior, Fleet foxes, Pentangle, Fairport Convention - you'll find Trimble right there doing something awesome. Just to be clear- this is to set the scene- the sound of the curiously named Oxlip is unique, original and so welcome.

The songs themselves are a cauldron of mysticism, folklorist parables, arrangements of traditional songs and melodies woven together with artisan skill. There is enough variation on the album, from heritage riches to new path contemporary influence, that the 'theme' of the album is both consistent and surprising. Oxlip have developed a sound - one that's self-defined and now recognisable as solely themselves.

The first track, 'Garden of Roses', hits you like a kind of sonic bath, it's something new, a bit eerie and edgeless, starting with Trimble's layered vocals ringing unaccompanied. There's a mystical siren feel, like something you'd hear in a Middle Earth forest that may get you into trouble, or not.

'This Dark Hour' has an old school, 50's late night dancefloor vibe mixing up the folk a bit which is a great and complementary contrast. Layers of heartbreak within an arrangement that leaves space for Trimble's mournful lamentation. There's hope there, a way out, 'let's go to the country and leave this dark hour, my love is like fresh milk but my heart has turned sour'. In a similar bar-room hymn style 'Prophet from St Paul' and 'The Well' blend a late night slow dance with a Sunday morning chorus.

The refrained 'Outshine the Devil' sports beautiful keys from Geoff Hilhorst, both classic and Hammond, with Evan Dunlop on drums being solid, well considered and light touched. Himself and bass player Chris Mason seem to form a watertight foundation, in classic Pentangle-worthy formation that allows Trimble and the rest of the band to take off throughout.

There's a strong soulful gospel/blues thread to the album; 'Dust' is a Wayfaring Stranger style ballad, with Trimble's echoing harmonies building alongside a stripped back banjo to a mournful, stunning fiddle instrumental from Kendel Carson (Even all this lot's names are ridiculously cool). A beautiful arrangement of Rev Gary Davis song 'Children of Zion', quite unrecognisable from the formidably wonderful original, features celestial vocals, well timed musical breaks and spacious tremolo style guitar and again, Oxlip make the song their own.

Overall, this is an incredible debut, sounding way more sophisticated, fully-conceived and formed that you would imagine a first album to be. It reflects the artistry inherent in its makers and I'll certainly be waiting for more from Trimble and the gang. Until then, reckon you should get this record, put it on and let it be a rich soundtrack to your easy days and hazy nights. That's what I'll be doing down here in Devon, anyway.