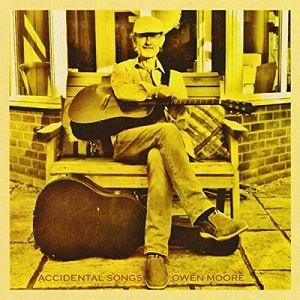 
It's what I love about new music. I sat here in review mode, expecting an entirely acoustic fayre, and what I got was a mix of country soft rock with catchy guitar melodies, drifting occasionally into something akin to '70s pop. Owen Moore's maturity of voice is backed occasionally by carefully placed harmonies, never too many, never too few.

"The Blue Lounge Corner Bar" was for me the album's immediate highlight, a country rock song that showcases Moore's rich voice. It's a song of unrequited love with a 70s pop feel. "Sweet Little Town" harks back to Moore's early life in a fishing village and hints that changes to the village have not all been for the better. There are places we experience in our childhood and youth that feel too special to change, because change seems somehow to intrude on those important memories, and atmospheric moments that can never be repeated.

"Nelson's Neon Jukebox" seems to lift the mood with its drummer-boy beat, and tells of life in Dublin back in the day, with its singalong, cabaret feel conflicting with a darker lyrical mood. "in A Song" is another stand out track, with echoes of Roy Orbison. Close your eyes and you can actually hear him singing this one. There are some especially nice touches in the backing vocals of this all too short song.

"The Kids From Gypsy Lane" raises the tempo again - a song about the excitement of growing up. It very much connects with my own childhood experiences and I am sure will resonate with other listeners "endless games with bat and ball, we hardly came inside at all". "Words To The Wise" is another love song, this one carried along by Beatles style backing vocals, and covering themes that almost everybody will understand. Like a number of these songs, it indicates that Moore's main music influences are from the 1960s and 1970s.

"The Lock 'em Up Hotel" introduces a calypso beat! It's a story about a miscreant locked up probably for minor offences who yearns for the loved one left at home, and to do all those things that can't be done when you are stuck behind four walls. "Somewhere Near" is another '70s style love ballad about a love that hasn't worked out. "As long as you are somewhere near I will be doing fine". This song will resonate with anyone who has experienced the breakup of a life changing relationship. It tugs at you for the rest of time.

"Chrome Caravan" is not just painting a romantic picture of the life of a tinker and his wife. It also deals with the objections and resistance to traveller sites in a locality and possibly harks back to Irish roots. One would question whether the red headed girl really does want to leave her life on the road for the security of a stone cottage. It's a way of life that many find they can't abandon.

When I saw that "Street Corner Days" was more than ten minutes long, I wondered how Moore would be able to sustain interest for that long. Lyrically it tells a good story, but the mood and rhythm rarely break, and it does feel that ten minutes is too long. "Things could be better but you're doing okay".

There is a melancholic, reflective, at time regretful theme to much of this album, which very much harkens back to the innocence of childhood and youth. Each of the songs is eminently listenable, and each has its own hook. These occasionally over-long songs are characterised by the first person, delivering a range of stories largely of Moore's personal life experiences, well produced and beautifully delivered.