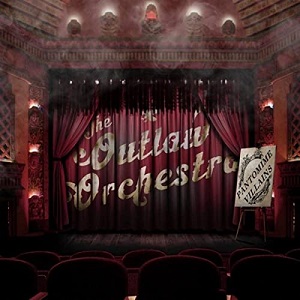 
If you like your music to come from the Deep South, then this debut, full 10-track album, from 'The Outlaw Orchestra' will be right up your street. The fact that they hail from the Deep South of England, Southampton to be precise, should not deter you one little bit. The powerhouse four-piece, comprising David Roux on guitars and lead vocals, Ryan Smith on drums/percussion/vocals, Pete Briley on Banjo/Lap Steel/Vocals and Alex Barter on double bass and vocals, have come up with a varied and distinctive blend of sounds guaranteed to bring a spring to your step, a twinkle to your eye and a beaming smile so wide that you will do well to prevent it from injuring your ears.

Influenced by southern country-rock, of the US variety, the group's self-labelled unique style, 'Heavygrass', is described as "A melting pot of styles from American Southern rock, British 70's rock, Louisiana roots to bluegrass." Indeed, even a cursory listen to 'Pantomime Villains' reveals an esoteric mix of Southern Rock, Bluegrass, Country, Cajun, Dixie, New Orleans Voodoo and Flamenco, just for starters, all delivered with high-energy and underscored by idiosyncratic British humour.

18 months on since the release of debut EP, 'The Devil Made Me Do It', and follow up, 'God Knows We Tried', 'Pantomime Villains' was recorded at the Old Chapel Recording Studios, Chichester, and threatens to take no prisoners, with its electrifying swagger drilling the well-honed tunes into the very bones of the listener.

The mood and tone of the CD is established right from the get-go, with opening track 'Take A Bow', which manages to evince the very best of 70s rock, albeit with added banjo. There's more of the same on the menu, literally, as this blazing opener is followed by 'Chicken Fried Snake', which again sounds as if the listener has been transported back in time to the heady, early days of The Old Grey Whistle Test, (a good thing, by the way).

Don't assume, however, that TOO are a one-trick pony; with 'Hanging Tree', there is a discernable acoustic-tinged, bluegrass feel as lightning-speed banjo-picking reaches warp-factor 11, whilst 'Whiskey Drinking Liar' is another foot-stomping tune which would not be out of place on a Kursaal compilation album, and 'Arabia' rocks out with guitar riffs and vibe which suggests a moonlighting Keith Richards.

'Jumpin' Jive' is a cracking track musically, the guitars evincing the feeling of a Rossi/Parfitt boogie at its very best before a return to the more country-rock tinged 'It Happened Again', a track which, to these ears, would not have been out of place on 1975's eponymous L.P. by, yes, you've guessed it, The Outlaws.

'Voodoo Queen' might just be the best song never recorded by Gogol Bordello. Imagine a Dr. John/Tom Waits/flamenco/klezmer hybrid and you might come close to what the group achieve on this fascinatingly original track. 'Too Much Willie Nelson', the penultimate offering, sees a return to a more rock-orientated sound before the group leave us with an album closer of the highest calibre.

'Send Some Whiskey Home' in a way confounds much of what has come before. The most thoughtful, in a music-compositional sense, track on the release, female backing vocals reminiscent of the best soulful outpourings of The Blackberries on Humble Pie releases, or even Sue Glover & Sunny Leslie for those of a certain age, cementing the overall effect created by the tasteful guitars and dusky, drink-infused voice alluded to by the libation mentioned in the title. A memorable way to end the album, and a perfect book-end to complement the opener.

There seems to be a vogue at the time of writing, with regards to 'rules', for certain politicians to feel that it's acceptable to re-write, or, as a minimum, 'follow instincts' to fit their own agenda. Whilst there is no way that I would ever seek to condone this type of amoral, fraudulent deception, it is clear that The Outlaw Orchestra are on a mission to re-write the rules of defining music genres, and for this they are to be applauded fully. The future looks bright for them.

Pantomime Villains? Oh no they're not. They're for real and they mean it.