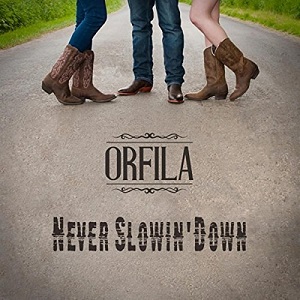 
I was both pleased and surprised when a second album by Folkestone acoustic brother/sister trio, Matt, Louise and Abi turned up in the post. Pleased because they're a talented outfit who write strong, catchy songs and feature strong harmonies, the two girls handling the lead vocals. Surprised because their 2014 debut album, Writing On The Wall, was a somewhat inconsequential and at times lacklustre affair that seemed unlikely to earn them a follow up. This was all the more disappointing when I heard the original demos recorded at the late lamented Highbury Studios in Birmingham, engineered and featuring drums by Rob Peters. This was an altogether different album, full of life and energy, but then the project moved to Kent and was taken over by producer-engineer Pete Brown with Liam Genockey on drums, draining it of any and all vitality.

However, they have, thankfully, resurfaced, this time with Sean Genockey twiddling the knobs (and on electric guitar), variously recording in London, East Grinstead and Nashville with backing musicians that include a less lumbering Liam on drums, pedal steel courtesy of both Melvin Duffy and BJ Cole and Travis Toy and Tommy Yankton, both from Rascal Flatts, on bajo and mandolin, respectively. And where, last time, there was an air of The Corrs and Rumours-era Fleetwood Mac about their folk-country pop, here they've refocused on being very much a country outfit, drawing on such influences as Lady Antebellum and The Band Perry as well as the likes of Shania Twain and Garth Brooks.

They kick off with 'Floor It', a frisky acoustic country stomper that, featuring Steeleye fiddler Jessie May Smart, pretty much sums up the sound and attitude as they talk about being ready for a brand new start and doing what they love before slowing the pace for the classic sounding steel-streaked walking beat ballad 'Just Somethin''. You'd be forgiven for thinking they were actually born and suckled in Nashville, suggesting this may one occasion when taking coals to Newcastle may actually pay off. Repeating the opening structure, backed by mandolin, 'It Would Be You' is another uptempo foot tapper, while 'All Along' is another excursion into balladry before they rock it up for some Southern country barroom fire on 'Fine Tooth Comb', a number that sounds like a real live crowd rouser.

Pedal steel again prominent, the mid-tempo 'Carry On' is back to their softer side with a singalong friendly chorus while 'Hit The Ground Running' plays pretty much as the title suggests, the band digging into some bluesy rocking before the positivity-charged 'Second Wind' turns to a twangier shuffle with insistent snare from Genockey and pedal steel providing background colour.

The album closes up with, first, the steel-stained mid-tempo 'When You Look At Me', followed by the upbeat, harmonica-burnished 'Raise A Glass', a toast to a parted friend but equally serving as a celebration of the band coming through what could have been career death to emerge stronger and brighter. Here's to them.