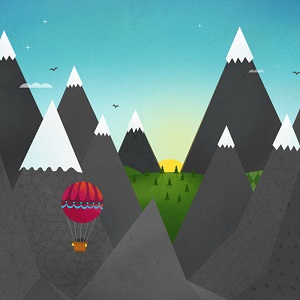 
I was recently given this album to review by a surveyor colleague who I know has a fine sense of humour. Listening to the album, it is apparent that is also transmitted to his music.

The six-piece band "Opaque" are an eclectic and genre-defying act which fuses elements of folk, swing and gypsy into their impassioned and engaging performances. Originally formed in 1999 in Peterborough, UK, their originality and flair has earned them both national and international acclaim. Their shows across Europe included support slots for Biffy Clyro, Kasabian and the Kooks, and garnered wide ranging admiration for the band from musicians and fans alike. Luke Pritchard from the Kooks wrote " Great band and brilliant album. We've been listening to it all month in the tour bus and would highly recommend them." That is quite an endorsement!

Last year saw Opaque release this album "A Little Belief", their third studio production, in both the UK and in the Principality of Liechtenstein. After more than 16 years on the music scene, they decided to see if they could become Liechtenstein's favourite band having seen a high volume of views on YouTube of their album in that particular landlocked country. Visiting the country and pestering the Prince with requests for an audience, the band has now been invited back by royal appointment to play for the Prince at his birthday celebrations. As a result of this initiative, they have also found themselves on TV, radio and newspapers including ITV News & BBC Cambridgeshire. You have to admire anyone with that type of drive and conviction and Moony, the lead singer and founder of the band, has that in bucket loads.

So what of the music? It is certainly an eclectic mix of genres with lyrics that are guaranteed to bring a smile to the listener's face. This is a band that does not take itself too seriously, despite being totally professional in its musical production. Titles like "Sir Laugh A Lot" and "Plastered In Paris" seem to define the band's approach to a somewhat tongue in cheek musical style. It is rare to find lyrics about "Osama bin Laden gardening in Notre Dame" in a musical offering but this album contains just such a line. The opening track "Angel Of The Street" will remind music fans from the 60's of the golden (?) age of skiffle. Lonnie Donegan would approve of this track! From a performance perspective, "I Need Reminding" is the stand out track for me, showing off the band's musical skills and variety to its best.

You would not expect to find a polka included in a modern era album but this one has "The Liechtensteiner Polka" in tribute to their popularity in that country. Perhaps more appropriate for "Strictly Come Dancing" but it works well here and I am sure it will do likewise for the Prince. "Higgledy Piggledy" is the type of song that the much lamented Jake Thackray would have sung.

The album closes with the title track "A Little Belief" which seems to sum up the band's aspirations and dreams. If I have one complaint about the album, it is that I would have liked to have heard a couple of slower numbers which would show what a terrific bunch of musicians they are. As it is, the pace is so frantic at times that the music tends to get lost behind the very clever lyrics.

The cover which features the band's journey from Peterborough (home) to Liechtenstein is one of the best I have seen in recent years. The artwork is stunning and the imaginative poster included with the album contains all the lyrics, albeit in a font size that the optically impaired may find difficult to read.

I would imagine that attendance at one of the band's gigs would ensure a session of fun and great entertainment. Most definitely a band to see live!

Angel Of The Street