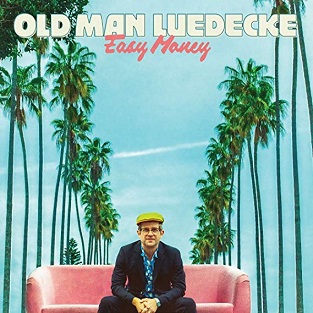 
If you’ve never before sampled the delights of the whimsical Canadian songwriter Christopher “Old Man” Luedecke, there’s probably never been a better time to start – or catch up! For Easy Money is already his eighth album, and although I’ve not even heard quite all of its predecessors myself I’ve heard enough to have gotten a feel for his individual talent – which has been compared to Loudon Wainwright III (especially in terms of wry self-critique) but with rather less of a political/satirical edge. I enjoyed the early OML records, but then I lost track a bit on and off until 2015’s Domestic Eccentric; that album didn’t connect much for me even tho’ it became his most successful album to date and won him some awards along the way.

So on to Easy Money, then, which, thematically at least, forms a followup of the “picks up where the last album leaves off” kind, chronicling the Old Man’s concerns and behaviour as a middle-age parent and on the way around the block reminiscing about some local Nova Scotia history. Like all the OML albums, it’s not a straight-down-the-line collection even in musical terms, and it does spring some surprises. Stylistically it’s less consistent, more wayward, with less in the way of old-timey/folk influences and quite a bit of calypso, possibly too much even. I’m not sure this works; it’s rather more of the “fun while it lasts, but nothing lasts long after” variety – Money Pit in particular outstays its welcome by repetition; only the piquantly tasty Sardine Song stays in the memory… However, when things get more philosophical and less frivolous, Mr. Luedecke has more to say and satisfies far more. On Death Of Truth he reflects poignantly on the death of his father, while I Wanna Go takes a playfully bluegrassy gospel slant to the eternal “too old to get right” conundrum.

For all the sometime-insubstantiality of those calypso-tinged settings, the playing is still top-drawer, with the trusty Fats Kaplin (banjo, mandolin, pedal steel) and Afie Jurvanen (guitar, vocals) with Rick Rigby (rhumba box). Tim O’Brien guests on fiddle and harmony vocal on Lonely County, a plaintive little call for togetherness that fits neatly with the affectionate How Do I Deserve Your Love?; that’s followed by the album’s cover, a fine rendition of Le Ciel Est Noir (which is basically Bob Dylan’s A Hard Rain’s A-Gonna Fall reworked into French by Nana Mouskouri), with Molly Sweeney adding a vocal part. After which, however, the rousing folky singalong The Mermaid feels rather out of plaice (sorry!).

Easy Money is nevertheless still worth your attention. It has its moments, sure, but in the end it does all seem rather too easy and relaxed, and for all its accessibility and friendliness, I still can’t escape the lasting non-impression of some of its songs – contradiction in terms tho’ that may sound.