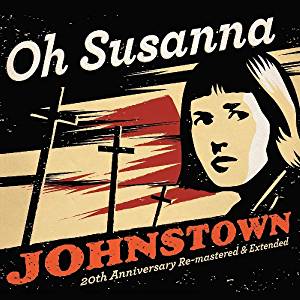 
Just in case you didn't know - Oh Susanna being Canadian singer-songwriter Suzie Ungerleider… here celebrating 20 years since the release of her independently-funded debut full-length album, a highly individual and iconoclastic piece of work by any standards and one which, although critically lauded, was something of a slow-burner commercially at first - that is, until its airing by Bob Harris, which led to a UK record deal and several UK tours. Since then, it's come to be universally regarded as a dark masterpiece of contemporary folk-noir, one which has grown almost exponentially in stature even despite a dazzling succession of six further pretty exceptional albums, notable among them 2017's concept-piece A Girl In Teen City.

This new "remastered and extended 20th anniversary edition", released to coincide with Suzie's woefully short UK tour in early-September UK, is an object lesson in how to repackage a masterwork, not only because the album itself emerges with even more impact at this temporal remove. Suzie's knockout vocal delivery is nothing short of visceral, and her unbelievably strong songs are accorded overwhelmingly apposite, cutting instrumental backings courtesy of Toronto producer Peter J. Moore (who'd masterminded Cowboy Junkies' landmark Trinity Sessions) and his crack team of collaborators including Bob Egan, Veda Hille, Bazil Donovan and Joel Anderson.

Right from the outset, Suzie's take on the murder ballad tradition, with its backdrop of the Johnstown Flood that occurred in Pennsylvania in 1889, showed she truly meant business, but every one of the ensuing eleven songs also displayed a singular passion and emotional intensity. Even the fulsome production of many of its tracks detracted not a jot from the immediate impact of the songs themselves (all Suzie's own compositions with the exception of Tangled And Wild, jointly penned with Bazil) and their coruscating delivery. It's impossible to ignore the brooding electricity-charged title song, the keenly lonesome waltzer Alabaster, the sinister narratives of love-gone-wrong The Bridge and Old Kate and the free-roaming-themed Back Dirt Road (to name but a handful of standouts). Indeed, with the benefit of hindsight at two decades' remove, the impression of a fully-formed consummate classic is even more pronounced. And it's reinforced by the inclusion of five bonus tracks which derive from the limited-availability cassette (A Shot Of Oh Susanna) which pre-dated the album itself and consisted of raw (yet artistically fully-formed), stripped-back, in-the face and truly blistering acoustic versions of five of the album's most crucial songs. It's great to finally get the chance to own those recordings, and they're not only an essential musical experience but a true revelation. This must amount to a key recommendation for the "reissue of the year" category of any 2019 awards. Oh, and by the way, this anniversary edition also finds the album making its first appearance on vinyl.

Hey now, don't you dare miss out on this outstanding album this time round!