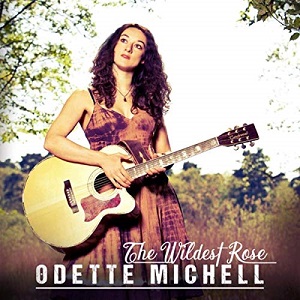 
It is the curse of every new generation to be compared to the generations that went before, but when your comparisons are of the likes of Sandy Denny, June Tabor and Annie Briggs that curse quickly becomes a blessing in disguise as Odette Michell is discovering.

It's been a few week since I was at the launch of "The Wildest Rose" at the legendary Twickfolk, or which more here, and a few weeks longer since this wonderful album dropped into my possession. To be honest one of the reasons it's taken me so long to write this is that I'm often so gobsmacked at what I'm hearing I keep forgetting that I'm supposed to be writing about it and just let myself be absorbed into the music.

Michelle is an artist that just seems to have burst onto the scene, after my first introduction to her I invited her to be on the Fatea Showcase Sessions, she was also a special guest of Phil Beer at the Fatea 30th Birthday Bash. Phil Beer being one of the artists that appear on her Stu Hannah produced debut album.

Unusually I'm going to refer to a track that doesn't appear on that album, "Who Knows Where The Time Goes" from aforementioned Sandy Denny, though it did appear on the preceding EP, it's the best version of that song I've heard outside of Denny's herself and in someway tees up the focus for the album, an artist that is capable of interpretation as well as deep rooted inspiration.

"The Wildest Rose" is an album that sits firmly with in "the tradition" and is a combination of learned and self-penned songs, with one thing, well two, in common. One is the attention to detail that all the songs get, the second they way she makes them her own. Regardless of which album song you drop into, you know it's Odette Michell's and more important that she's singing it for you.

There is something personal and personable about "The Wildest Rose", it resonates and climbs into your heart. It's an album that speaks to you and gains your attention because you want to listen, not because it demands. It can take on darker and deeper themes, not because they feel threatening and brooding, but because putting them into the light, helps give them context.

Odette Michell has the potential to be one of this generation's comparison points, future artists may both bless and curse the name, but rest assured they will all hold it in high regard and declare "The Wildest Rose" an inspiration.

Bless The Ground You Grow On