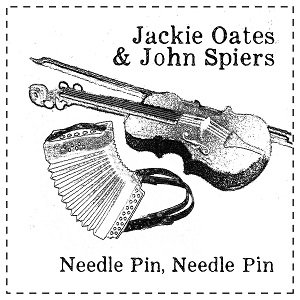 
A limited edition, handcrafted collection of songs and tunes (complete with an 8-page booklet and hand-stamped gatefold card case) recorded by Oates and Bellowhead melodeon player Spiers (along with Mike Cosgrave on piano) in January as part of her residency at The Museum of English Rural Life in Reading, this is a delightful homage to the ancient art of lacemaking, and part of a longer, radio ballad entitled The Lace Makers - The Lost Art of Telling in which songs weave around spoken word and narrative. The songs, mostly traditional, explore the rhymes and 'tells' that were once sung by bobbin lace makers who learned their trade at lace schools around the Southern Midlands, the first of which, is 'Congleton Bear/Whittlesey Straw Bear', the John Tams-penned song coming from her Cheshire hometown and about how, allegedly, its dancing bear died the night before the annual wakes and the church bible was flogged of to raise money for a new one. It is, aptly enough, paired with the ursine titled processional tune.

Several of the tracks are sprightly instrumentals, the first being 'Beatrice Hill's Untitled/Old Hog Or None', a twinning of the tune collected by Russell Wortley in 1956 from the playing of Beatrice Hill at Bromsberrow Heath in Gloucestershire with the slightly slower and more lurching Morris Air collected from Charles Bunyan of Oxford by Cecil Sharp. They, in turn, are followed by their own compositions, 'Gallons Of Brandy/Fox Tell', the first a suitably glass raising Spiers-penned slip jig, the second, Oates' setting of a lace tell once sung by children at a lace school in Olney, Buckinghamshire, that recounts a local story in which a girl narrowly avoids a sinister fate by her worthless lover, counting up from one to twelve with each number representing a pin stuck into the lace pillow, the winner calling out 'I'm done' on the twelfth.

Next up, the last of the hybrids, 'The Cottage In The Wood/The Queen's Delight' are two traditional numbers, the first learnt by Oates at a singaround in Sidmouth, recalls when journeymen moved from town to town seeking work, always uncertain of where they'd spend the night after their regulation 40 miles a day hike, though it's unlikely any of them enjoyed quite the sort of good luck here. The second part is another from the Morris tradition, this time from the Cotswolds.

Featuring Cosgrave, 'There Was A Lady All Skin And Bone' is an old Halloween ballad about a woman contemplating becoming wormfood that found its way into children's play rhymes, and, since night's always a good time for a ghost story, again with piano accompaniment with Spiers providing harmonies (indeed the song was also recorded by Bellowhead), they also include 'Death and the Lady', apparently a regular trotted out in the night time lace making sessions, Oates calling to mind the young Sandy Denny here

Mortality also gets a nod on 'Come Away, Come Away, Death', a setting of the song from Twelfth Night and one of the earliest extant references to lace makers' tells when Duke Orsino refers to "the free maids that weave their thread with bones do use to chant it".

And, talking of bone needles, written by Leonard Wheatcroft around 1650, 'The Bone Lace Weavers Song' stitches together fragments of three lace making songs from Bedfordshire, here set to the lilting melody from the Irish ballad 'The Two Greyhounds'. Seventeen-seconds lace tell fragment intro aside, 'Travellers Joy' is a brief instrumental by Janet May, the melodeon player with South West Shropshire Morris outfit Martha Rhoden's Tuppenny Dish.

'Lace Tells' is exactly that, a collection of children's tells, 'Golden Girls', 'Betsy Bays and Polly Mays', 'Twink It Away' and 'Wallflowers', woven into a tune by Oates, leading into the final two numbers, firstly Oates accompanied by hymnal melodeon and piano for 'Cattern Day Tells', another set of lace makers' songs, the title referring to the annual lace maker's holiday held in Northants, Bucks and Beds on St Catherine; Day (Nov 25), she being the patron saint of spinners, but the three tunes here, 'Kattern Day', 'St Clement Begging Song 'and 'Here Comes Queen Catherine', being translated from the Flemish and actually relating to Tanders Day, celebrated later on St Andrew's Day (Nov 30).

Finally, another translation, they end with Alexandre Desrousseaux's 'L'P'tit Quin Quin', written in 1853 and translated by the duo from the Picard language, a language closely related to French and spoken in Northern France, as 'The Little Child', a fiddle and melodeon lullaby sung in the voice of a lacemaker, coaxing and threatening her child to try to get him to sleep so she can get on with her work. A definite case of Merry Bobbins all round.

The Congleton Bear and the Whittlesea Straw Bear