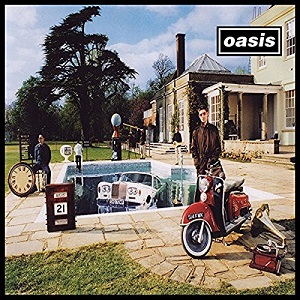 
Was it really 19 years ago, almost two decades…? Well, yes it was and I for one wouldn't mind betting the years since have gone a darn sight slower for the members of Oasis (and a good number of their fans) than the few months before and after the release of Be Here Now in August 1997. That summer it felt like Oasis was the only game in town. Blur and Pulp, their biggest rivals in Britpop, had got bored with the braggadocio and wandered off on their own creative paths, leaving Noel, Liam and the boys to live it large all around the world.

This may have also been the summer of Primal Scream's Vanishing Point and Spiritualized's Ladies and Gentlemen We Are Floating In Space - both better records and neither exactly under-stimulated - but nobody lived it larger than Oasis. Not ever.

Noel was taking holidays with Johnny Depp and Kate Moss in Mick Jagger's villa on Mustique, getting his head together (oh yeah?) to write songs and make demos with producer Owen Morris. Those tapes disappeared down the back of the proverbial sofa soon after Be Here Now was completed, lo and behold, here they are in all their ragged glory providing much of the interest around this reissue of the era's most hyped and high profile record.

Liam gave Oasis the edge and added spice they needed to become the biggest band in the world, but the building blocks were always Noel's songs and the Mustique demos are the clearest indication yet that what he laid down is what they went with. The versions are rougher, they lack the full fat vocal explosion of the younger Gallagher, but their structure, tempo, most of the lyrics and feel are pretty much what was heard on the final album.

But is it any good? Well, at the time we all went batshit crazy for it, how could we not? After years of downplayed modesty, self-deprecation and good blokeness, suddenly Britain had a band with genuine swagger, who wore their hubris like a halo and behaved like nobody since Led Zep had ever dared to. Post-punk, post-baggy, post-rave, theirs was the voice of the guttersnipe writ large on Mount Olympus. And we loved them for it.

So when they withheld review copies of the record, made music hacks sign gagging orders and essentially declared themselves to be bigger than the game they had long since refused to play, the fans loved it. Absolutely f***** loved it. They bought nearly 425,000 copies of it on the day of release - the UK's fastest selling album in history. After three days it had done nearly 700,000.

How many of those copies were still being listened to after the first week or so is not known.

For what the record carries is a dozen tracks of overblown, self-satisfied, pompous ego-massage masquerading as the magnum opus of Britpop. There's a total lack of restraint and with its layers and layers of guitar tracks, trebly sound and steam hammer snare drums, there's good reason to refer to it as the band's 'white' album. All Around the World - a single if you please - drags on for nine minutes through three key changes, then returns in a reprise to close the album. The lead single D'You Know What I Mean makes a stab at sound sculpture and clocks in at around eight minutes, Stand By Me (another single) manages six minutes and a direct lift from All the Young Dudes, Magic Pie has seven minutes and so on and on and on and on…

In the run up to this reissue Noel set out to 'fix' the album but got fed up with it after D'You Know What I Mean. The '2016 rethink' version is included here along with a spread of other demos, b-sides and afterthoughts that are unlikely to trouble any but the most ardent completest, of which there are many of course.

It's a stretch but if you can listen beyond the pomp and forget the circumstance this new three-disc edition captures a clutch of half decent songs - the uncharacteristically self-possessed production of Don't Go Away is brilliantly out of step with the rest of the album, the stretching-for-Bacharach blind belief that propels Going Nowhere makes it Noel's most under-rated b-side and Stay Young is as good an anthem to giddy youth as any to spill from his pen.

Be Here Now was always going to be a difficult beast to wrestle into the cosy revisionism that usually accompanies such reissues. But it is what it is and it's to Noel's credit (let's not kid ourselves, people) that he has permitted it to stand on its own two feet… albeit feet of clay.

Noel Gallagher On Be Here