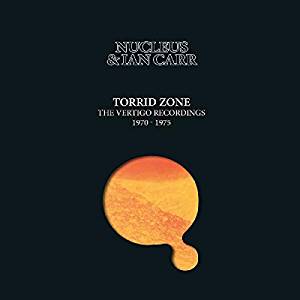 
This important, exhaustive new anthology will have been eagerly awaited, since it presents, under one convenient six-disc roof, every track released on the Vertigo label (Polygram’s “progressive” imprint) by the legendary (and groundbreaking) jazz-rock group Nucleus and its founder Ian Carr, during the first half of the ’70s. Importantly, all of these recordings have been newly-remastered for this release (the only reliable previous CD outing for the nine albums concerned being a series of BGO “twofers” from the turn of the century!).

During the final years of the ’60s, a hell of a lot had happened in terms of expanding musical horizons and breaking down established barriers, and that welcome, if heady progression was to continue apace, reverberating through at least the first year or two of the new decade – albeit arguably more so in some spheres of music than others. Jazz-rock was a particularly fruitful field for exploration and integration, and the visionary ideas and activities of some of the era’s key musicians made so much possible. Trumpeter and flugelhorn player Ian Carr was one of these figures, a much-respected musician with a pioneering tendency that recognised the potential of integration and fusion of different strands of jazz and rock sensibilities. At the time (1969), Ian was independently pursuing an experimental path in parallel with musicians like Miles Davis and Frank Zappa and outfits like Manfred Mann Chapter Three and Tony Williams’ Lifetime, while an increasing number of the underground “progressive” bands from Soft Machine downwards were also dipping into jazz modes, some more tentatively than others and with varying degrees of success and credibility that were not necessarily concomitant with the level of musicianship on display. Tired of what he perceived as the then-current formulaic nature and stale state of British jazz, Ian brought into that melting-pot his specially convened, small and tightly knit “nucleus” of musicians comprising Karl Jenkins (sax and keyboards), Brian Smith (saxes), John Marshall (drums), Chris Spedding (guitar) and Jeff Clyne (bass), all of whom shared common musical ideals.

Thus was born Elastic Rock, the group’s innovative debut album, which brilliantly embraced the elemental power of rock music and persuasively set out the group’s stall with a series of coherently linked pieces that upheld the concept of music as a continuous (if restless) process without entailing the laboured “extended purposeless jam” scenario that dogged much contemporary jazz. The equally brilliant, incandescent Roger Dean-designed album sleeve was the perfect reflection of the disc’s contents, a true melting pot indeed. And surprisingly emotional with it – another Carr/Nucleus hallmark.

Then came album number two, We’ll Talk About It Later, a full year afterwards, which both consolidated and developed on the methodology of Elastic Rock. The classic, white-heat fusion of late-1971’s Solar Plexus which followed was the last Nucleus album to be made with the original lineup, and both Jenkins and Marshall were to leave the band soon thereafter.

The anthology continues in strict chronological order with the series of impressive, experimental albums from Carr’s nominally solo offering Belladonna (1972) and the ambitious, magisterially augmented Labyrinth (which incorporated some ingenious wordless vocal contributions from Norma Winstone), then onto the innovative, if reflectively autobiographically-inspired Roots, the further expanded lineup of Under The Sun, and the less cerebrally slanted, synth-heavier Snakehips Etcetera. There may have been a sense of winding down here and with Carr’s ninth Nucleus album Alley Cat, but it still embodied his creativity, what has been termed his skilful, sometimes classical approach to themes, where the intelligence of the melodic content meets the free-blowing improvisation head-on through punchy funkiness, which unlike moments in American counterparts like Weather Report avoided degenerating into displays of sterile technique and empty “noodling”. Carr steered his fellow-musicians unerringly through many such a minefield, and this can be appreciated by listening through these Vertigo albums en bloc, wherein Carr informs and revitalises the increasingly popular jazz-rock idiom. His integrity and musicianship inevitably won through.

This is a highly recommendable set for anyone seriously interested in the birth and development of jazz-rock in Britain, and the booklet essay provides a helpful perspective on Carr’s achievement.