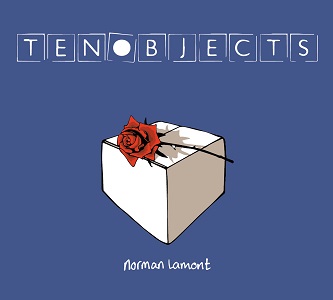 
Not the former bushy eye-browed Conservative Chancellor of the Exchequer, but a singer-songwriter from Edinburgh, this is his seventh studio album (one of which was all instrumental) and one that nods to advancing years when bereavements, navigating relationships and life ringing its alarm clock start to occupy your thoughts.

The album inspired by The History Of The World In 100 Objects and adopting a vaguely conceptual approach of the central character reflecting on what has led him to where he is, featuring Toby Wilson on keening pedal steel, the country slow waltzing 'Makes Sense To Me' opens proceedings with a song about a love cynic having his heart and eyes opened. The musical mood quickly changes for the relaxed, title track and the start of a tentative romance, huskily sung (evocative of Pete Atkin) and backed by acoustic guitar, jazzy hand percussion and cello, it's probably the only time you'll hear Brian Eno's 'Another Green World' mentioned in a lyric.

Things gets bluesy on the harp wailing 'Lump Sum' wherein out hapless hero finds that coming into a tidy stash suddenly makes him very attractive to the opposite sex while, by contrast, the fingerpicked 'Anniversary' with its oboe and cor anglais stands as a reminiscence on loss, presumably through death, as he sings how there's a "hole in the shape of you" in his and his friends' lives.

The spirit of Randy Newman hovers over 'Too Many Nights From The Sea', a piano ballad reflecting on how he no longer craves for the days of being footloose and fancy free before shooting at the tear ducts with 'If I Could Be With You' which joins the ranks of 'The Living Years' and 'Everything I Own' in the son missing his father and wishing they were still here ranks.

I'm sure many out there have found themselves talking about their problems to a stranger rather than the person that matters, and that's where, perched on a barstool with harmonium and harmonica in the background, the mournful 'Everybody Has A Story' comes in.

The darker side of things lurks in the shadows of the spare piano-backed and cello stroked 'Don't Ask Me' about trapping someone in an abusive relationship, leading into the nigh six-minute acoustic strummed, liltingly and slightly Latin melodic 'Other Things', a musing on how, we distract ourselves from facing reality by escaping into comfort blankets like television or technology.

It ends with 'Gordon (Down On The Tracks)', a slow waltzing campfire hobo lament etched on acoustic guitar and with the sampled sounds of owls and dawn chorus, as it tells of the titular homeless figure, curled up in a sleeping bag on the railroad tracks, offering no explanation as to what brought him so low or any hope that he'll see out the night, but how sleeping in the presence of danger and "to know that you wait with no time to lose brings a moment of grace".

A quietly contemplative album that needs you to listen to the words, it's not going to turn his world around, but it might just make yours feel a little less lonely in its shared emotions. A life that's sometimes happy, sometimes sad, unlike his namesake, Lamont has his books well-balanced.