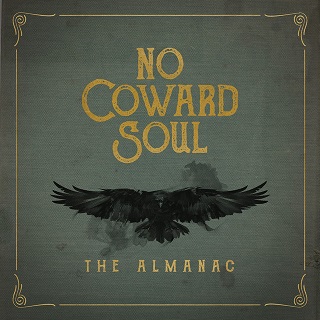 No Coward Soul
Album: The Almanac
Label: Self Released
Tracks: 13
Website: http://www.nocowardsoul.com
.Based in London and fronted by guitarist/mandolinist Alaskan Brad Schmauss, this debut album is the culmination of three years of gigging across the UK, gathering experience and establishing their name. Featuring Martin Gray on piano and guitars, Jon and Jules Clement Smith respectively on drums and bass and Sarah Phillips aka Egg on harmonica and Glock, the band name taken from the title of an Emily Dickinson funeral poem (and not, as you might have thought, the Portuguese restaurant in Maine), it draws on both Schmauss' South London experiences and memories of a childhood spent amid the Alaskan woods.

Schmauss reveals an engaging soft sandpapery rasp to his voice on the piano-backed poppy love song opener 'Lighthouse', the album switching stylistic tack for the Americana train rhythm 'Fireflies' where he has a certain vocal resemblance to the young Willie Nelson and yet again for the late night mid-tempo barroom piano blues of 'Bullet' and the Paul Simonesque undulating calypso groove of 'Holy Toledo'.

Such variety is at once the bands' strength and potential weakness, showing diversity but never an easy to tag musical identity. But then, rather that than a album where sameness and an overarching familiarity prevails. As such, it continues with the dry fingerpicking folksiness of 'Nighthawks', a musical mood revisited later with 'L'il Mikey Mountain', while cranking up the power for the rhythmically, accordion-accompanied lurching 'Belly of the Whale' and the wonderfully titled album centrepiece 'Death N Texas' that seamlessly weaves together its Texicana flavours in a manner the Mavericks would surely applaud.

Backed by discordant noise and ending on a baby's gurgling, the brief title track comes as a spoken word surprise spilling out a Cormac McCarthyish poem based around American football, pulling listeners back in with the steady warblingly anthemic notes of 'Braves' before heading towards a close with the harmonica laced drunken slow march lurch of 'Orpheus' and the five minute bouncy gallop that is '654' with hints perhaps of Barenaked Ladies.

It ends in a gospel-tinged country mood with the organ-backed, slow waltzer love song 'Gotta Believe', where the lines 'you gotta believe, only believe, just don't believe in nothing' echoes the theme of faith in Dickinson's poem. One of the year's best debuts, you can believe you'll be hearing much more from them in the months ahead.