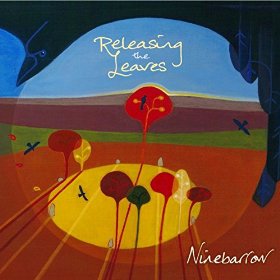 
There's an old adage that something too good to be true usually is. Similarly, in the film world a great film has to work twice as hard to impress cinema goers that have been subject to the hype of their friends, raised expectations is a dangerous double edged sword.

It's not that Ninebarrow, Jon Whitley and Jay Labouchardiere don't have the form, debut album "While The Blackthorn Burns" drew praise from the likes of the Telegraph, Mike Harding and Kate Rusby, it also landed them a debut album of the year award, it's more that I get wary of albums that seem to only draw praise from my mind. Am I setting it up for a fall, do I see fireworks and miss the stark falling to earth of a burnt out rocket, while after a good number of plays, I can categorically say this is an album that burns brightly and continues to do so.

Without a doubt this album fulfils the history lesson, geography lesson and a body or two criteria that all top draw folk albums need. Even better that a lot of the tales are drawn from my Dorset stomping ground and even where not directly, such as closing track, "Dark Eyed Sailor", have drawn on the nautical themes that resonate around the shores of this country and beyond.

One of the things that gives Ninebarrow and edge is the triumvate of threads that weave the core sound, Jon and Jay's voices, both solo and in harmony account for two of these, with their reed organ adding the third. (Take special care of that box boys.)

As you would expect from Ninebarrow, "Releasing The Leaves" is an album strong on songs, something very much emphasised by the songbook that accompanies the CD, which tells how the songs were chosen and written for this project and a few pictures that help you get under the skin of Jon and Jay and visualise the inspirations.

The balance on this is as a fine as an apothecary scale, pace, tradition and contemporary, voice and instrument, the elements that combine to make "Releasing The Leaves" hold a special equilibrium. It may not balance across a particular track, all 11 songs hold their individual own, but when it comes to the lost art of assembling an album, few are finer, the quality that of the craftsmen.