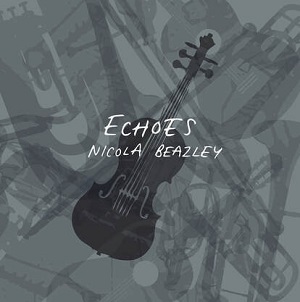 
Although she’s best known for her duo partnership with Alex Cumming and as member of the Rosie Hood Trio, Sheffield-based fiddle player Nicola is now confidently branching out on her own with this six-track EP. Although ostensibly a solo venture, it finds Nicola’s (five-string) fiddle in the company of a five-piece band possessing quite an unusual instrumental complement. This consists of a brass trio of cornet, tenor horn and tuba (on this recording Tom Hurst, Georgia Woodhead and Matthew Beazley), guitar (Andy Watson) and fiddle (Katie Williamson). Intriguingly combining Nicola’s various influences – her love of research into traditional music, her penchant for dance tunes and her upbringing in the brass-band world – the music on this EP blazes bright and bold, showing a keen use of layered texture without clouding the lines.

After a deceptively leisurely start to the EP, the music gathers pace, and the common denominator on the first couple of tracks is the Rushbearing celebrations – in Oakenhoof, Saddleworth and Whitworth respectively – while the second (title) track concludes with a Northern version of the well-known Floral Dance and a tune from the famed Britannia Coconut Dancers of Bacup. The music really sparkles and glows, while also inviting a certain amount of judicious foot-tapping along the way. Nicola displays a real flair for texture, pitting twin-fiddles against brass players resulting in complementary interplay, while Andy’s glistening electric guitar also provides an unusual and original companion for this grouping. A good majority of the tunes on the EP were composed by Nicola herself, and display her lively interest in all manner of traditional English instrumental music forms. They range in tempo and style from a wistful slow tune Fieldhouse and a couple of jigs to an accelerating polka. The Echoes medley calls on traditional tunes, while the closing Mount Hills (also traditional), a favourite of Nicola’s, is affectionately turned into a beautiful waltz.

A delightful EP of tunes which proves to be considerably more than that, and begs the inevitable question of where to next, Nicola?