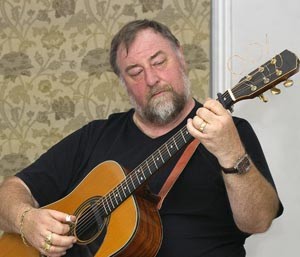 
I’ve sung the praises of Nick Dow many times both on this site and in other publications, and it’s always a great pleasure to receive a new recording of his to savour. I might add, even greater a pleasure to hear him performing live (it really is a privilege to have him lending his support and presence to our local singing session). But I digress… Suffice to say that Nick’s one of the most charismatic singer-guitarists on the folk scene, and while I’d stick my neck out and rate him among this country’s very finest singers I’d also rate him among its most honestly interesting and gently skilled – and lyrical – guitar players. His singing is robust and assured, characterful and dependable and fully committed to the storytelling. Although Nick’s in constant demand at folk festivals and clubs the breadth of the land, he’s not yet attained the household name status that his top-drawer artistic quality should by rights afford him, but he’s thoroughly sanguine and modest and remains humbly at the service of his craft.

Nick’s latest release is a collection of Songs From The Travelling People. And there really is no-one better qualified to deliver this material, for he’s been immersed in the culture of the Travelling People for many years, having married a Romany and lived within the Romany community for many years, spending a great deal of that time decorating and restoring Gypsy wagons, and signwriting, for a living and all the while learning the craft of singing directly from the Romany people. All the pieces on this CD (nine songs and one tune), if not collected from the Travellers Nick has known directly, thus have some intimate connection with people or places he and Mally have visited over the years. As is customary with Nick’s records, background notes are provided as to the songs’ sources (he’s a seasoned song collector and researcher, and integrity is his by-word). Three of the disc’s songs come from the Lee Family of Blackpool: these include the two songs which Nick sings unaccompanied, Her Mantle So Green and The Dark Eyed Gypsy, which I consider sheer standouts. They’re sung in the Gypsy manner: deliberately expressive, weighed and measured but not ponderous, and every last syllable and nuance holds the listener’s attention. Quite literally spellbinding, these are truly exceptional readings – and the passage of “tuning” with which The Dark Eyed Gypsy is brought to a close is breathtaking. The rich, full timbre of Nick’s voice is heard at its best on the unaccompanied selections, and my only minor reservation with this disc is that there are only two of these. (I could of course heartily recommend Nick’s earlier release Unaccompanied for those who are sufficiently captivated.)

That’s not to say that the remainder of the songs, self-accompanied on guitar, are in any way sub-standard; these are without exception very fine performances which would stand in the front rank of any comparison – especially so, I thought, with The Blacksmith, Creeping Jane and Riding Down To Portsmouth. And Nick’s insightful and affectionate rendition of the disc’s non-traditional song – Tom Walsh’s The Faithful Horse – must be considered its definitive reading. Nick also turns in a decent “folk singer’s” rendition of the Travelling community’s favourite song Master McGrath, but points out that he can also sing it “the other way”, slower and unaccompanied like “Big” Roy Morris his source – now, that would’ve been a useful addition to the tracklist methinks!

Well that’s the purely audio portion of this release; but there’s also a close-on-half-hour video segment where Lawrence Ingham from BBC Radio Manchester interviews both Nick and Mally about life on the road with the Travellers and their work with Gypsy caravans. The special qualities of the Travellers – their survival, pride and resilience – are so strongly conveyed in this interview, as is their acute sense of community and their love of their unique lifestyle. After an interview with Mally concerning aspects of her life, there’s some archive film, then Nick is interviewed about his passion for wagons, then after some more recent footage of Travellers with their horses, we’re treated to a wonderful gallery of photos of wagons which Nick has owned, worked on or photographed. Beautiful wagons in glorious detail, real works of art, and duly crediting the names of their painters. In the video’s penultimate section Nick discusses in detail the interior restoration of a wagon including the installation of a Queenie Stove, and all is rounded off with the final segment of the gallery and interview with Nick himself.

A fascinating insight, and a great companion to the audio CD.