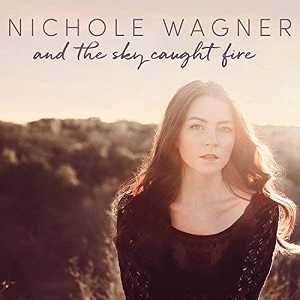 
Having made her debut with an EP last year, the Austin-based songwriter now releases her first full length collection. For the EP, she included a fine cover of Springsteen's 'Tougher Than The Rest' and here she turns her attention to another iconic name, the late Warren Zevon, for her wistfully dreamy Stevie Nicks-like swayalong interpretation of 'Reconsider Me' from 1987's Sentimental Hygiene.

Everything else is either self-penned or a co-write, opening with the equally slow sway fragmenting romance of Winner Take All setting the scene for the relationship theme that runs through the material, Wagner accompanied throughout by a solid collection of musicians that include Will Sexton and producer Justin Douglas on guitars. It gets gutsier on 'Dynamite', one of two Terry Klein co-writes, the southern grit in her soul spilling out over the vocals, followed by the second, the more delicate, folksy 'Yellow Butterfly' with its piano frills and acoustic guitar.

Arguably the best number, or at least the one with the catchiest chorus, slow waltzer 'Rules of Baseball', follows, a summer romance break-up number that, opening with some backward guitar, spells out that the most important rule of baseball is "there's no crying when you lose."

You can understand why someone like Rod Picott would take her under his mentorship wing, joining her here to duet on the slow burn 'Fires of Pompei (We Should Walk Away)', an early co-write with Kristin Kirkpatrick about whether to light the fuse or avoid having to face the ashes. The second Kirkpatrick co-write closes the album with the steady, organ-backed slow swagger of 'Sparks & Gasoline' (the lyrics carrying another baseball reference to the designated hitter), while, elsewhere, 'This Kind of Love' turns up the pace for punchy power-pop country with a catchy line in descending chords, 'Let Me Know' is a midtempo country lope and, stretching out to close on five minutes, 'The Last Time' is a moody, desert guitar feel meditation on the desperate realisation of clinging to the ghost of a love that's died because "Being with you is like being with a stranger, but it's better than being alone", the track sliding into a desolate electric guitar solo and a closing cacophony of drums and feedback. An impressive debut, if this is a taster of what lies ahead she's going to be turning a lot of heads.