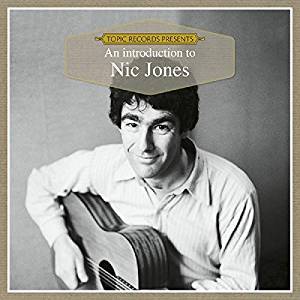 
As we all know by now, Topic Records celebrates its 80th anniversary this year, and in true style, with a host of splendid releases. Some constitute expanded or deluxe editions of seminal albums from the label’s illustrious catalogue, whereas others take the form of creatively compiled and handsomely presented anthology-collections. This single-disc Introduction To Nic Jones fits squarely into the latter category, and there can be no argument about Nic’s status or his automatic and guaranteed place in this series of introductory primers, for he’s unquestionably one of the label’s most influential recording artists – that influence having stretched forward to the present day over a very long timespan amounting to around half of the label’s own longevity. And this despite his having enjoyed a comparatively brief performing career prior to the horrific road accident in 1982 that he was fortunate to have survived at all, let alone to find himself performing again today (if the full story isn’t well known to you, then Colin Irwin’s booklet essay for this release gives an admirably concise and sympathetic summary).

I could say that any compiler of an introductory anthology of Nic Jones’ recordings will have faced at once a very easy and a very difficult task. Very easy, in that there can be no argument that Nic’s most famous and finest recording was made for, and released on, the Topic label, so it would have been all too tempting to just reissue this benchmark 1980 LP Penguin Eggs. But also very difficult, for to gain the fullest picture of Nic’s achievements and career it would’ve been necessary to gain the rights to the albums he recorded for Bill Leader’s label prior to Penguin Eggs; to this end, and by way of partial compensation, the Game Set Match compilation of 1970s live recordings (which was released on Topic in 2006) has been mildly ransacked, resulting in the appearance here of two songs (Isle Of France and Billy Don’t You Weep) that had previously appeared on a studio album together with further representative items from his working repertoire during his years as a professional performer. Classic performances all, and direct and persuasive evidence of Nic’s musically imaginative and often unpredictable way with interpreting folk tradition – but it goes without saying that the task of the compiler is entirely unenviable, for so much more might have been included to gain a more complete picture (albeit a more expansive – and expensive! – proposition). Although four of the nine tracks from Penguin Eggs are present and correct here (and in remastered form) – chosen since they are “identifiable for the relaxed ease of Nic’s delivery, his genius with a compelling rhythm, an intimate way with a powerful narrative and an instinctive feel for an engaging chorus” – folks will doubtless still be asking how their own particular favourite from that LP (say Canadee-I-O or Little Pot Stove for instance) can have been omitted… but I’d say this selection fits the bill very nicely thankyou, and anyone coming even relatively new to discovering Nic Jones will not be disappointed by this primer-introduction. And that’s before I finally learn from the booklet credits that the compiler of this release is Nic himself!

However, for me this new release’s biggest attraction, and its true glory, is its addition of two absolutely magical bonus tracks, never-before-released, recorded in the studio in 2013 with musical support from Belinda O’Hooley (and Nic’s son Joe too on one of them). These tracks – the iconic love-conquers-all story-song I Only Spoke Portuguese and Nic’s own thought-provoking new composition Now – are a tremendously powerful representation of Nic’s status as survivor and comeback hero, and both are masterfully performed demonstrating above all Nic’s unmatched way with a song.

This release is therefore not only of great musical value, but also fulfils the compiler’s (modest and hopeful) stated aim to “set your own visions alight”. Inspirational indeed.

This review of "An Introduction To" came from a seasoned fan for the perepective of a newcomer, Click Here

I Only Spoke Portuguese