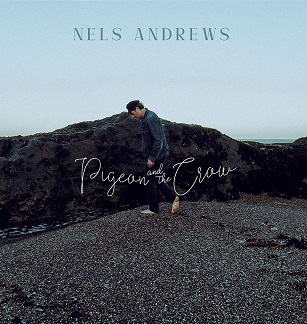 
Having had an itinerant early life, wandering from Alaska to New Mexico, Andrews is now based in Santa Cruz but, whether it's down to the influence of his producer, traditional Irish flautist Nuala Kennedy, there's a definite touch of the same Celtic twilight that shines through Van Morrison's early work here.

It opens with Scrimshaw, a term relating to the ancient art of carving whalebone, which was, in fact, the title of his previous album even though it contained no song of that name, Set to a brushed snares waltzing shuffle beat with Sebastian Steinberg on upright bass and Shane Cook on fiddle, it tells the story of a traveller who "hitched westward with hypnotic visions", got high on mystic provisions ("the wafer I bought in the mission had me talking to god") and is now somewhat the worse for wear ("10,000 midnights leave crowfooted canyons"), but, while "the ferris wheel's closed for the season" and it's 50 degrees ("but on this coast that's freezing"), he ready for one last hurrah ("come up to your dressing room? yes I'd be flattered/I'd bribe the seamstress for satin, that fell from your thigh…loosen your hips like a bollywood queen") as he declares "I bury my hard truths in wonderful fiction/the trellis is creaking from bearing the weight of the spring".

That sense of not being ready to be rolled over and cast aside is there too on the bluesy fingerpicked, 'Memory Compass', accompanied by Kennedy's flute and accordion courtesy of Stelth Ulvang from The Lumineers as he sings "I'm the bonfire's ember but I'm not done yet/you can light your last match for that last cigarette/You say you really should quit but you can't quit now/even broken clocks still tick/ your little hands spin somehow". Referencing 'Thunder Road', he wonders "if you had those children, did you figure out how to fix a loose leg with a matchbook, not throw the whole thing out".

As you'll gather, he's something of a storyteller, and the title track is something of an epic, a collaboration with illustrator Mike Bencze in a fusion of image and words as he unravels the true story of a young girl, "salted sunlight in her hair", who fed a crow in her backyard and received gifts in return, re-imagined as fictionalised a supernatural ballad allegorical love story in which the girl gives birth to a daughter and, after seven summers, "the child born mute began at last to sing the spell the radio cast/A song so sure that the poplars cried/freed the spirits trapped inside".

He's philosophical too, advising on the lovely, folksy slow march of 'Holy Water' with its plucked strings and simple guitar chime that "One thing about treading water/do it too long and the shore forgets you're there", a song about winning and losing ("I keep thinking when I sink under/next time up I'm going to grab what's mine") but always counting your blessings ("I don't sleep late on Sunday mornings, but when I do wake, you're looking back at me and I'm swimming in holy water").

The slow sway 'Eastern Poison Oak' is another number redolent of Irish influences with Cook's fiddle and Marla Fibish on mandolin, again touching on the allure of living for the moment's desire ("I've got a sweet tooth/so I bit into hard candy/could have waited it out/some things melt in your mouth/if you're strong and you're patient") even if "when I come down I'm shaking", and talking of love in poetic language and how "like laughing in church trying to fight it is worse when the whole hive is trembling".

Reflecting his life, a wanderlust of the soul permeates the album and while the words may be not always be easy to understand, their sense is always clear, such as in the more uptempo fiddle-laced alt-country shuffle of 'Table by the Kitchen' where he sings "I found that I lost it in the street, wrote about it in longhand in the back of restaurants. Watching the people watching each other, thinking I want what he has got", another song about earned wisdom ("it's so easy when were young mistaking anger for truth") that references Peter Pan ("second right, straight on until morning/the man I am and Neverland, finally came to blows") with all that entails.

The restlessness-themed ("we are hunting and we are gathering dandelions and shooting stars") 'South of San Gregorio' shifts the musical landscape with Chris Wabuch on steel drums giving a Caribbean lilt to the offbeat percussion that provides the rhythmic motor on a number that sneaks in a Motown mention with papa was a rolling stone.

Crushed hopes, this time of a relationship that's not turned out to be the promised vision, are again there on the circus imagery of 'Lion's Jaws', chasing dreams or illusions ("the runaway fantasy of tumbling thieves then you're out in the ring juggling swords and feathers") musing "maybe if we'd read different bedtime stories where the heroes were bakers and candlestick makers we wouldn't be chasing these fleeting glories" and how "you're gonna need every sequin on your dress to stick your head in the lion's jaws again" as the woman lies awake, her marriage a "diamond ring stuck on your second finger/stone set fast in the calloused skin", days spent "swimming in dishes" wondering "between the night and the daydreams…what might have been".

That notion of other lives never lived, of dreams never realised underpins 'Welterweight', the story of a faded theatre actress sleeping through rehearsals, missing her cue and leaving the nervous understudy "painted to the nines in a part too big and a dress too small as the stage hand feeds her lines", conjuring a deep sadness in the lines "You should've seen me in my prime/Just take the fall and collect your fee", left "wanting more than open calls , the half-filled halls and the numbers at the door". It could easily be about Judy Garland.

The album ends with, first, 'Embassy to the Airport', a strong Paul Simon echo to both the melody and the lyric ("I met a man at a dinner party who fought the sea and won/he talked at length about the rescue but not the hour before the sun rose/we all make deals with the darkness/just this once and I'll tell no one") as the father of the song reflects on "the steps we take backwards to find the things that we have lost", ending with the inspired imagery of non-commitment "I am made of Samsonite/in the morning I'll be gone". And, finally there's the 'Candidate's Handshake', a slow waltz duet with Anais Mitchell, mandolin and flute back keeping company, about growing older, bidding farewell to "summer's end, the short legged nights, the long legged days" in the weariness of growing older and hearing and seeing what you want to hear and see as they sing "Come cloud my sunshine, with clouds in your eyes 'til I see what I want to see there I take what I want to take".

Wistful and evocative, quietly melancholic and veined with a sense of the natural world, it's a hushed meditation of the heart.