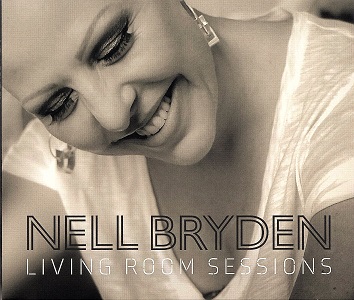 
Recently, I was approached to see if I would like to write a review on Nell Bryden. I readily agreed having checked her out on YouTube. Three days later, somewhat ironically, she appeared on the Ken Bruce programme on Radio2 as part of his piano room sessions. To my surprise I then received, direct from Nell, one LP and one EP. A double bonus!

Nell was born in New York but now resides in London and is married to an Englishman.

I was aware of Nell beforehand but I have to admit that I had not really taken much notice of her, despite the fact that she has been recording since the early 2000s. Having listened to her latest work I realise that I have wasted too much time by not concentrating on this remarkably talented singer. Arguably, she has not yet achieved the fame and recognition that her talent deserves, and I have no doubt that this latest album "Living Room Sessions" and her new EP, "Soundtrack to Little Wing" will redress the balance. The EP is designed to accompany and complement Nell's foray into the world of literature with her debut novel entitled "Little Wing." The EP sleeve contains excerpts from the forthcoming novel to supplement the songs.

Nell has a voice that is comfortable singing Rock. Blues, Folk, Jazz and, in fact, any genre of music. It is also a voice that has the capacity to make the listener shiver, such is the quality of her intonation, diction and clarity of her vocals.

With the exception of the track "Eyebrows Wild as the City" all the other tracks on the 5 song EP also appear on the full album. The album itself is a mix of Nell's compositions and three classics, "The Tracks Of My Tears," "Drift Away" and "That's All Right" which was the debut single of another famous US performer, Elvis Presley. I believe that The King would approve of Nell's version. The self-composed songs are varied and heartfelt. "Smoke In My Heart" is an absolutely beautiful song with a simple but effective piano backing.

The album was, surprisingly, recorded in Nell's apartment in London with the support of backing musicians Ali Petrie and David Page. Listening to the quality of the recording, it is difficult to believe that this was not recorded in a studio, such is the excellence of the end result. The EP was recorded at Ray Davies' Konk Studios in London.

Structured uncomplicated backing is the order of the day for Nell allowing her superb voice to be the prime instrument of her recordings.

Nell starts a UK tour on the 5th June in Maidstone, ending on the 12th July in Bury. Go and see her and witness, in the flesh, a singer with genuine star quality.

Smoke In My Heart