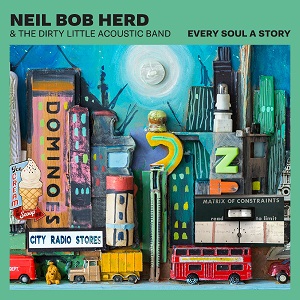 
Formerly with Sid Griffin's alt-bluegrass outfit The Coal Porters, this marks Herd's solo debut, bringing more twang and a lot more electricity to the sound but maintaining his established songwriting style and spotlighting his Scottish brogue. Working with fellow ex-Porters multi-instrumentalist Paul Fitzgerald and fiddler Gemma White as well as the rhythm section of Glenn Lamberton and Gary Smith Lyons with Lucy Edwards guesting on accordion, it kicks off with the rural idyll gone south divided nation (or just a relationship) themed rockabilly romp 'Bad Land', easing into more of a swing meets Buddy Holly feel for 'As Much As I Need To Do' before Edwards joins in on the Celtic shanty swayalong 'The Colour of History', the album standout that pays tribute to the lives lost in the sinking of the troop ships Tuscania and Otranto off the isle of Islay during WWI, the former to a trpedo and the latter to a collison.

There's a 'Gentle on My Mind' touch of early Campell to the upbeat, pedal steel, banjo and telejo shaded 'Leave Only Love (Old Dog)' whereas it's The Proclaimers (who encouraged Herd to not hide his accent under a bushel) who come to mind on 'Light A Single Candle', a song about providing inspiration and hope rather than being the blind. Then, Fender bass and baritone guitar step up to the plate for the loping 'Everyone's Got A Book Inside', a number about everybody as a story to tell that might have you thinking of the Mavericks were they Scottish.

I'm not exactly sure what a Scunny guitar is, but Herd plays it on the nagging rhythm of 'Well, Well' which may be what it gives it the harder sound, though, with satirical lyrics about time hopping and "a day return dystopia", it's not one of the strongest tracks.

The ballad 'Coming Back As Jason', essentially about being reincarnated as the bloke you look up to, is a better bet and again streaked with pedal steel, the album ending with another slow number, love song ballad 'Exactly What I Wanted' and, finally, the choogling, reverb guitar rock of' Best Song'.

I have to say, there's nothing really strong enough to make this a keeper, but it's rarely less than undeniably listenable and, with I guess the most obvious comparison being Hank Wangford and his various permutations, they'll never be short of work on the country clubs and bars circuit.