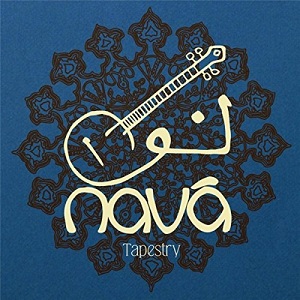 
An unusual though curiously natural concept, and a strangely coherent marriage of cultures. Four young musicians versed in their respective traditions – Irishmen Paddy Kiernan and Niall Hughes, and Iranian-born brothers Shahab and Shayan Coohe – explore the relationship between the musical cultures of Ireland and Persia, weaving musical material from both traditions into surprisingly seamless musical tapestry of sound.

This is well instanced in the opening track, where the reel The Rolling Wave is paired with the Iranian tune Chahar Mezrab. And yet, there’s also quite a pronounced feel of bluegrass – or should I say newgrass – to the music of Nava, especially through the conduit of Paddy’s banjo. Most notably perhaps, on his own compositions, of which five are featured on the disc. The general climate of Nava’s music is (inevitably) string-biased, with the ringing tones of Shahab’s santoor (Persian hammer dulcimer) prominent in counterpoint with the guitar and banjo lines, while rhythmic impetus is generated and maintained by Shahayan’s percussion (mostly tár and tombak).

The individual, and rather mesmerising, quality of Nava’s invention is perhaps most strikingly felt on the pieces of Iranian origin, although the Irish tunes also spring some surprises – for instance Comb Your Hair And Curl It is the subject of a series of solos and some imaginative use of syncopated percussion, and Banish Misfortune feels even more insistent than usual. The Semuta Jig, a slow, sinuous slip-jig with bass solo, contrasts with the breakdown-style Magic Box and disc finale The Persian Connection on which Paddy’s banjo technique mirrors the stylings of the santoor as the piece builds through a thrilling percussive charge to an abrupt stop.

Tapestry is altogether an invigorating and enterprising mix, although it’s not easy to imagine how and in what direction Nava’s music might now develop onward in the future.